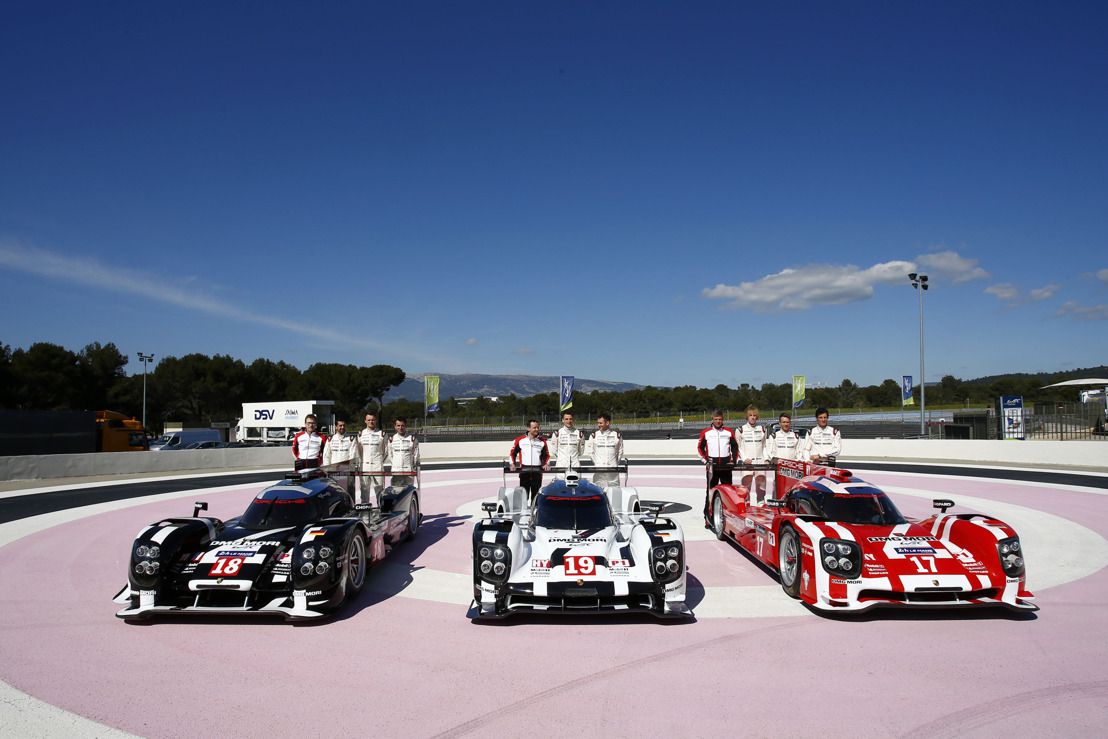 Zaterdag 28 maart 2015 — After Thursday’s presentation of the new Porsche 919 Hybrid, the Porsche Team enjoyed productive testing at the Prologue to the 2015 FIA World Endurance Championship (WEC) in Paul Ricard, covering 4,188 kilometres in total. At the presentation of the new prototype, Porsche announced the switch to the highest energy recovery category of 8 megajoule. No other manufacturer has done that before. Furthermore a three-colour concept for Le Mans had been unveiled. At this race Porsche will start with a white, a red and a black 919 Hybrid. At the other seven World Championship rounds all the cars will be white.

At the two-day Prologue, which has established itself as a joint test and fan event to kick off the season, the two works driver trios were on duty: Timo Bernhard (GER), Brendon Hartley (NZ) and Mark Webber (AUS), as well as Romain Dumas (FRA), Neel Jani (CH) and Marc Lieb (GER). After every session a Porsche 919 Hybrid was on top of the time sheets. Neel Jani set the overall fastest lap time of the Prologue in 1.37,220 minutes on Friday night.

In bright sunshine and mild ambient temperatures, it was only some very strong winds that hampered testing on Friday. Fritz Enzinger, Vice President LMP1, summed up after the first meeting of the entire WEC field: “For sure we have got a very fast car. But we are also leaving Paul Ricard impressed by the performance of the competition on longer runs.“

Team Principal Andreas Seidl said: “All LMP1 cars have made huge progress compared to 2014. Such a step from year one to year two was to be expected, considering how new and how open these regulations are. For us it was important to practice and double-check all procedures with two cars and all drivers before the first race. All the drivers managed a good mileage and had the chance to again familiarise themselves with the traffic in daylight and at night. Despite the heavy winds on day one, we’ve almost ticked off our entire programme. This included a qualifying simulation on Friday. On Saturday we were focussing on longer runs.”

Drivers car number 17
Timo Bernhard (34, Germany): “It was good to meet the competition at the Prologue, and we were able to identify areas which we need to improve. I think the Silverstone circuit might suit others better than us. The various car concepts have individual strengths, but nevertheless the competition is very tight and exciting. In 2014 the Silverstone 6 hours was the first race of our learning season. This year I have a top position in the World Championship in my mind.”

Brendon Hartley (25, New Zealand): “We have improved in all areas, but the others have as well. It will be very close racing in Silverstone. I love racing there. In 2014 this was my first event as a Porsche works driver and we got a podium straight away. I am a big fan of Copse Corner. It is a very high-speed corner, and you have to be quite brave. Actually the whole next section with Maggotts and Becketts afterwards is really nice. I think we are all very excited about the first race of the season. We ended last year with our first win, so we have been counting the days down until the first race.”

Mark Webber (38, Australian): “It was nice to see all the teams again here in Paul Ricard. On day one the wind was really tricky, but on day two conditions were perfect. The focus then was on long runs, as we still have to find some performance there. Everyone is working really hard to extract as much performance as we can from our Porsche 919 Hybrid. The team is great. For 2015 everyone in the WEC has lifted the bar. Silverstone is demanding with a huge amount of change of direction and fast corner combinations. It will be challenging. Silverstone stands for pure racing and a great crowd of fans.”

Drivers car number 18
Romain Dumas (37, France): “We have a very strong car in terms of performance. We also recognised that our main competitors are, as well, quicker compared to last year. So it looks like we can expect a great battle at the first race of the season. The driveability of our car is better - the team is ready. I like Silverstone because the Brits are really enthusiastic about motorsport. The only problem: Normally, there is not so much sun. That’s the only thing I miss there.”

Neel Jani (31, Switzerland): “The development and test work was very good, but you’re never finished with that business. Since the Prologue we know that we can expect tight competition in Silverstone. For me it is a kind of home race, because part of my family lives in the UK. Despite the new part of the track, it is still a fast one and really old-school. In recent years there have been more and more spectators for the WEC race and I hope this continues. The Brits really enjoy good motorsport.”

Marc Lieb (34, Germany): “It was a good Prologue for us. For the first time two cars were running and we worked with our car crews just as we would during a race weekend. We have learnt a lot and found further room for improvement. The true balance of performance we will only see in Silverstone. In 2014 the season opener was a disappointment for our car because we retired quite early. So there is a score to settle.”