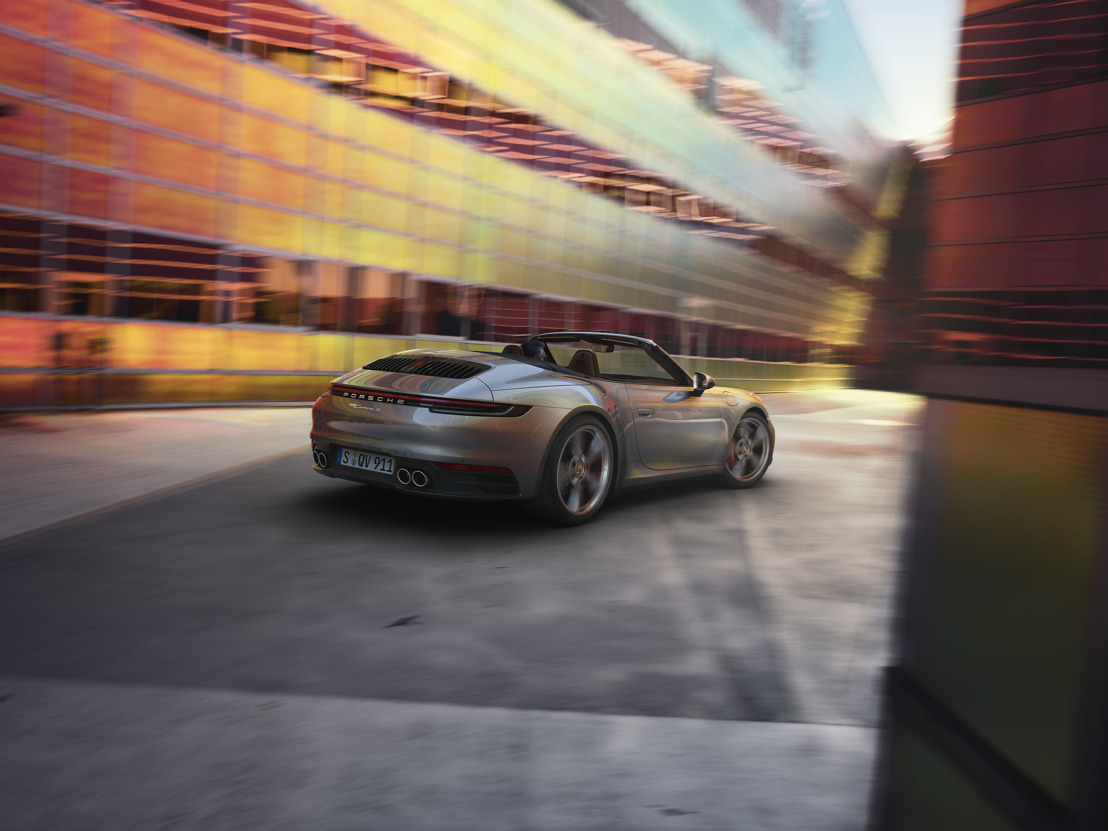 Porsche launches three new sports models at the 89th Geneva Motor Show. The highlight is the new 911 Cabriolet(1). “With each new generation of the 911, we face the challenge of enhancing our iconic car carefully and yet consistently to meet the needs of the future,” says Oliver Blume, Chairman of the Executive Board of Porsche AG. Alongside the rear-engined 911 Cabriolet, Porsche also unveils the
718 T, a 300 PS mid-engined driving machine in Boxster(2) and Cayman(2) forms to the audience gathered in Geneva. The Macan S(3), with new V6 turbocharged front engine, completes the debuting trio as a bestseller in the model range.

Four months ago, Porsche launched the new 911 Coupé in Los Angeles, and the eighth generation of this timeless sports car is much more powerful, fast and digital than ever before. Now it’s the turn of the Cabriolet, the open-top variant of the 911. The S model features a 331 kW (450 PS) twin-turbo engine that delivers top speeds of over 300 km/h, and acceleration of 0-100 km/h in less than four seconds. Drivers can enjoy the new eight-speed dual-clutch transmission and with the Porsche Wet mode even safer handling on wet roads. With a design that puts a modern twist on classic elements from classic 911 models.

The new 911 Cabriolet is the newest in a long line of open-top Porsche models that includes the company’s very first vehicle. This body style first appeared in the 911 family more than 30 years ago, and it continues to symbolise uniquely intense driving experiences to this day. The weight of the soft top has been further optimised, and it now takes only twelve seconds to completely fold it away, thanks to a new hydraulic motor – it closes back up with the same swiftness too, even when travelling at speeds up to 50 km/h. Made predominantly from magnesium, the high-tech structure of the soft top, designed by Porsche, prevents the roof from ballooning even at high speeds.

Porsche launches a second new model at the Geneva Show, the 718 T. The new touring variant of the Boxster and the Cayman combines the 220 kW (300 PS) powerful four-cylinder turbo boxer engine with highly sophisticated dynamic components such as the Sport Chrono package and PASM sports suspension that includes a 20-millimetre-lowered body. The car also comes equipped with PADM adaptive body positioning and Porsche Torque Vectoring with mechanical rear differential lock as standard – features which are being made available with the 2-litre boxer engine for the first time. In combination, they pack the high-performance character of the two-seater sports car into an especially exciting Porsche experience: the 718 T will be most at home on winding country roads, offering the sheer joy of driving as its ultimate goal. Equipped with the essentials, this puristic driving machine is the heir to the 911 T from 1968 and the 911 Carrera Clubsport from 1987.

The new Macan S – more powerful, with a new design and fully networked

The new Macan S also makes its first public appearance in Geneva. Porsche has comprehensively upgraded the Macan in terms of design, comfort, connectivity and driving dynamics. The distinctive Porsche design DNA can be seen in the compact SUV’s three-dimensional LED light panel on the rear of the vehicle. LED technology will also be standard for the headlights in future. The most eye-catching new features in the interior are the 10.9-inch touchscreen of the new Porsche Communication Management (PCM), the newly arranged and designed air vents and the optional GT sports steering wheel familiar from the 911. The PCM makes it possible to access new digital functions such as intelligent voice control and standard online navigation. The range of comfort equipment is extended with Traffic Jam Assist, an ioniser to improve the air inside the car, and a heated front windscreen. The Macan S is powered by a new V6 engine with 3-litre displacement and twin-scroll turbocharger in central turbo layout. The engine has a power output of 260 kW (354 PS) and torque of 480 Nm. The seven-speed dual-clutch transmission (PDK) and the Porsche Traction Management (PTM) all-wheel drive are a perfect match for the new engines.