At the 24-hour race on the Nordschleife of the Nürburgring, Porsche customers have once again performed strongly. Despite rain, fog and hail, which at times caused extreme track conditions at Germany’s largest motorsport event, the squads celebrated five class victories witnessed by more than 200,000 fans. With the Porsche 911 GT3 Cup, the Black Falcon Team TMD Friction won the SP7 class with Rent2Drive-racing winning the SP6 class. Manthey Racing (SP-X) and Raceunion Teichmann Racing (Cup3) also clinched class victories with the Porsche Cayman GT4 Clubsport, with the Black Falcon Team TMD Friction squad proving unbeatable in the V6 class with the Porsche 911 Carrera.

However, the charge of the 911 GT3 R fielded by the Porsche works team Manthey Racing came to an abrupt end on Sunday morning. With almost five hours left to the 44th running of the Eifel classic, the 500 hp racer from Weissach came to a standstill in its 100th lap. At this point, Michael Christensen from Denmark had been running in fifth place with the number 912 vehicle. His teammates Richard Lietz (Austria), Frédéric Makowiecki (France) and Jörg Bergmeister (Germany) experienced the retirement from the pits. With rain just setting in, they had hoped to improve their position in the closing stages of the race. On Saturday, when the race was restarted after a three-hour break due to storm over the wet racetrack, Jörg Bergmeister had managed to overtake no less than eight competitors.

The Porsche factory squad faced adversity right from the start, with Nick Tandy hitting a barrier with the #911 Porsche 911 GT3 R in just the second lap. The Manthey Racing mechanics had already put in a nightshift to repair the vehicle after an accident in the Top 30 Qualifying and had managed to get it back on its wheels shortly before the warm-up on Saturday morning. The best Porsche team in the overall classification was Falken Motorsport, with drivers Wolf Henzler (Germany), Martin Ragginger (Austria), Peter Dumbreck (Great Britain) and Alexandre Imperatori (Switzerland) planting the 911 GT3 R on ninth place.

Comments on the race
Dr Frank-Steffen Walliser, Head of Porsche Motorsport: “My congratulations go to our customer teams who defied all odds in the race over 24 hours and celebrated class victories under difficult conditions. For our works team, it was unfortunately not such a successful weekend, in spite of a highly motivated and extremely dedicated performance from drivers and crews. They took all the setbacks, such as the slide in qualifying and the early retirement of our number 911 contender, in their stride and without complaint and continued to do what they could towards achieving a common goal. The 912 was the only car that at times could match the pace of the leaders. We were running fifth and were well prepared to make the most of the rain. But it was not to be. I can promise our fans that we will be back and we will do better. A big compliment to Monaco: Our Porsche Junior Matteo Cairoli has won the 250th race of the Porsche Mobil 1 Supercup. Although he is only 19 years old, he withstood the enormous pressure and gave an immaculately performance in the race, which he had worked hard for in qualifying. To show such composure on a street circuit is impressive.”
Richard Lietz (911 GT3 R #912): “It’s unbelievable the freak weather conditions you can experience on the Nordschleife during a 24 hour race. We had it all – rain, hail and fog, sometimes all at once. Luckily my engineer Andrea warned me via radio that hail was on its way and urged me to drive even slower than I already was in the face of the severe weather front and the wet track. Without her fiery Italian warning, I too would probably have ended up in the barriers. Still, it wasn’t quite enough for us today. But we know exactly what we have to do to come back even stronger next year.”
Michael Christensen (911 GT3 R #912): “Our engineers don’t yet know what the problem is. The car suddenly rolled to a stop and I couldn’t change down. The engine stopped and wouldn’t restart. That was that. This race is and remains unpredictable and has once again lived up to reputation. On the other hand, the Nordschleife also gives a race driver experiences that can’t be found on any other racetrack in the world.”
Frédéric Makowiecki (911 GT3 R #912): “We were well prepared for the race. But of course you can’t predict the weather. Still, we had a good package with which under normal circumstances we could have achieved a podium result. It’s a pity that our strong team effort wasn’t rewarded.”
Jörg Bergmeister (911 GT3 R #912): “Unfortunately that wasn’t quite the weekend we’d all anticipated. Nevertheless, it was still a lot of fun to contest this exceptional race with the 911 GT3 R. We’ve definitely gained some important insights which will help us to progress. The motto for us now must be to return in 2017 and do it better.” 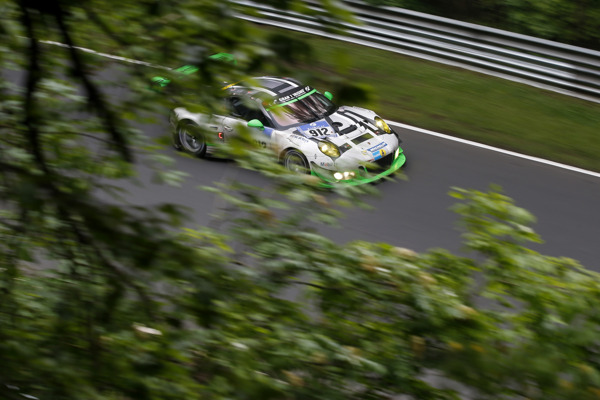