Wednesday, March 7, 2018 — Porsche is unveiling a vehicle with many talents and a spectacular design language at the Geneva Motor Show: the Mission E Cross Turismo. The strengths of this Cross Utility Vehicle (CUV) include an emotional design with striking off-road elements as well as an innovative display and operating concept with touchscreen and eye-tracking control. With a low-cut bonnet between heavily curved wings, the front of the Mission E Cross Turismo reveals its relationship to the iconic Porsche 911 sports car at first glance. Other distinctive design features are vertical air inlets in the front known as air curtains and matrix LED headlights.

The silhouette is defined by a sporty roofline that slopes off to the rear, which Porsche designers refer to as a ‘flyline’. The broad wings and three-dimensional side panels with air outlets behind the front wheels reinforce the sporty crossover character of the concept car, which is 1.99 metres wide. For Michael Mauer, Head of Style Porsche, it was especially important to choose a visual language that fitted perfectly with the product when it came to photographs of the Mission E Cross Turismo. In order to make this ambition a reality, Porsche was able to gain the support of Stefan Bogner, photographer and publisher of Curves magazine.

Limited light and special lighting angles emphasise the car’s design. ‘The special qualities of the outline, the interior and the infotainment system only really come into their own if you make intelligent use of light and shade,’ notes Bogner. This is the perfect way to showcase highlights that represent a new era of electric mobility. The apparent contradiction of using low light to present the unmistakable Porsche design DNA of the Cross Turismo is perfectly fitting for this ‘understated’ Porsche. Only with low light do the pictures reveal how much attention to detail went into designing the concept study.

Even from behind, the study can immediately be recognised as a Porsche with its exclusively light grey metallic paintwork. In addition to its sporty design and air-channelling roof spoiler, the continuous light strip is a typical feature. A large panoramic glass roof extends from the windscreen to the boot lid, ensuring a generous sense of space.

For Bogner, the Mission E Cross Turismo possesses a sensuality that other electric cars lack. One of his favourite picture motifs is the Porsche lettering on the rear of the CUV. Each character is designed using three-dimensional glass. In Bogner’s view, lettering that is illuminated blue has the potential to become a unique identifying feature for electrically driven Porsche cars. In addition to a series of atmospheric pictures, the photographer created a film made exclusively from photographs – a new idea at Porsche. 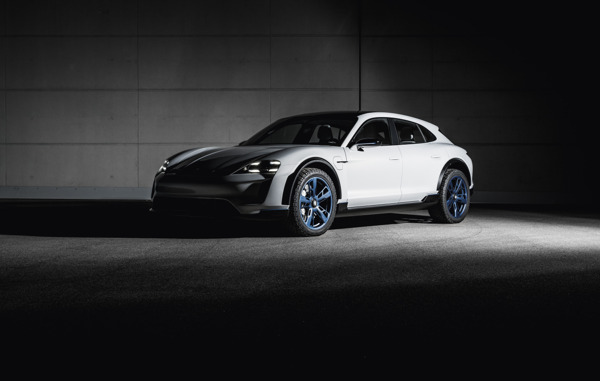