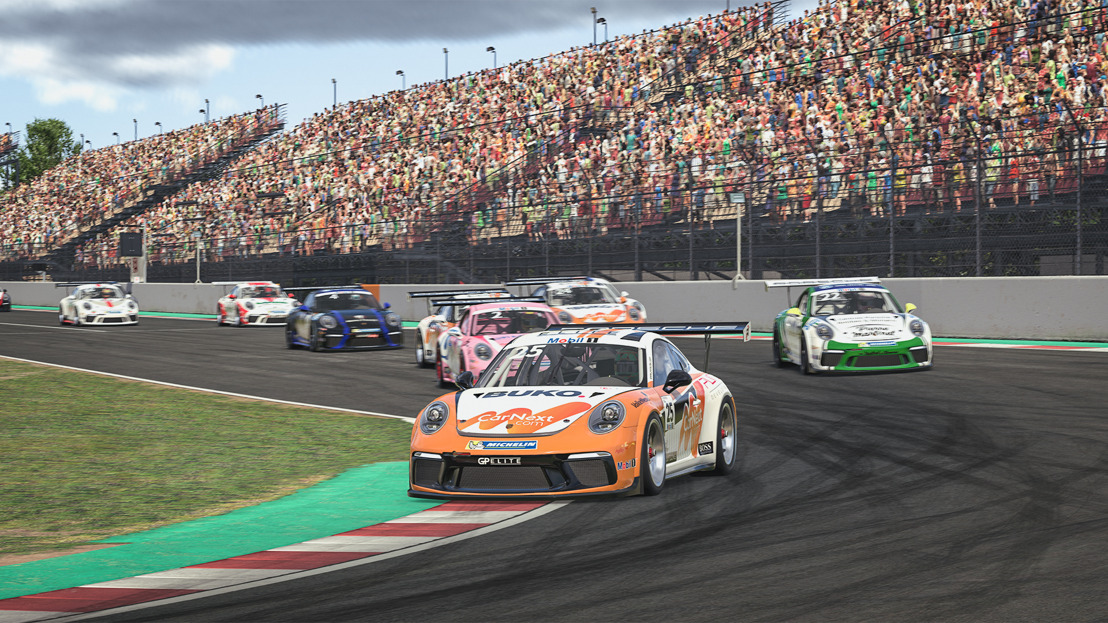 Monday, April 6, 2020 — At the action-packed opening event of the Porsche Mobil 1 Supercup Virtual Edition, Larry ten Voorde (NL/Team GP Elite) and Porsche Junior Ayhancan Güven (TR/Martinet by Alméras) celebrated their victories. Ten Voorde won the first of two races on the Circuit de Barcelona-Catalunya in Spain, with Güven claiming round two. A total of 31 drivers took up the virtual event in their 485 hp Porsche 911 GT3 Cup racers. Joining the registered drivers for the real Porsche Mobil 1 Supercup on the grid were Porsche works drivers and well-known professional pilots.

Both races were packed with thrills and spills. Many overtaking manoeuvres led to accidents that resulted in a high number of retirements, especially among the Porsche works drivers. Only Sven Müller (D/Agility Management AG), Simona de Silvestro (CH/ABB) and Nick Tandy (GB/ExxonMobil Oil Corporation) were able to hold their own against the seasoned Supercup specialists at the wheel of their virtual 911 GT3 Cup vehicles.

The start of race one proved key: Taking up the race from the second grid spot, ten Voorde managed to squeeze past pole-sitter Güven. An enthralling duel unfolded between the pair. In the final phase, the 22-year-old Güven made a final attempt to overtake the Dutchman in the final corner – however, ten Voorde fended him off to cross the finish line first. “That was so much fun. I’m thrilled to win the very first virtual Supercup race. Unfortunately I made a couple of mistakes in the second race, which Ayhancan Güven used to his advantage,” said ten Voorde.

Race two also turned into a gripping battle for victory between ten Voorde and Güven – this time the Turkish Porsche Junior prevailed. Güven passed the Team GP Elite driver in lap one and took the chequered flag after 14 laps two seconds ahead of ten Voorde. “That was a tough but fair fight with Larry ten Voorde. We’ve demonstrated just how exciting motorsport can be on a simulator. To kick off the championship with a win is fantastic,” said Güven. Third place again went to Pereira, with van Kuijk and Joey Mawson (AUS/Fach Auto Tech) finishing on fourth and fifth.

Leon Köhler (D/Lechner Racing Middle East) won the rookie class, with the Austrian Philipp Sager (Dinamic Motorsport) winning the ProAm category. Porsche Junior Jaxon Evans experienced bad luck during race two, with the New Zealander spinning off the racetrack in the first lap and concluding the race on 20th place. “My start in race two was really good and I was fighting for third place. I spun, unfortunately. Still, it was great fun and I’m looking forward to the next races,” said Evans.

After the season-opening event, Güven and ten Voorde are tied at the lead of the championship with 45 points each. Pereira ranks third with 34 points. The next double-header round of the Porsche Mobil 1 Supercup Virtual Edition is contested on 18 April, when the drivers will pit themselves against each other on the Silverstone Circuit in Great Britain.