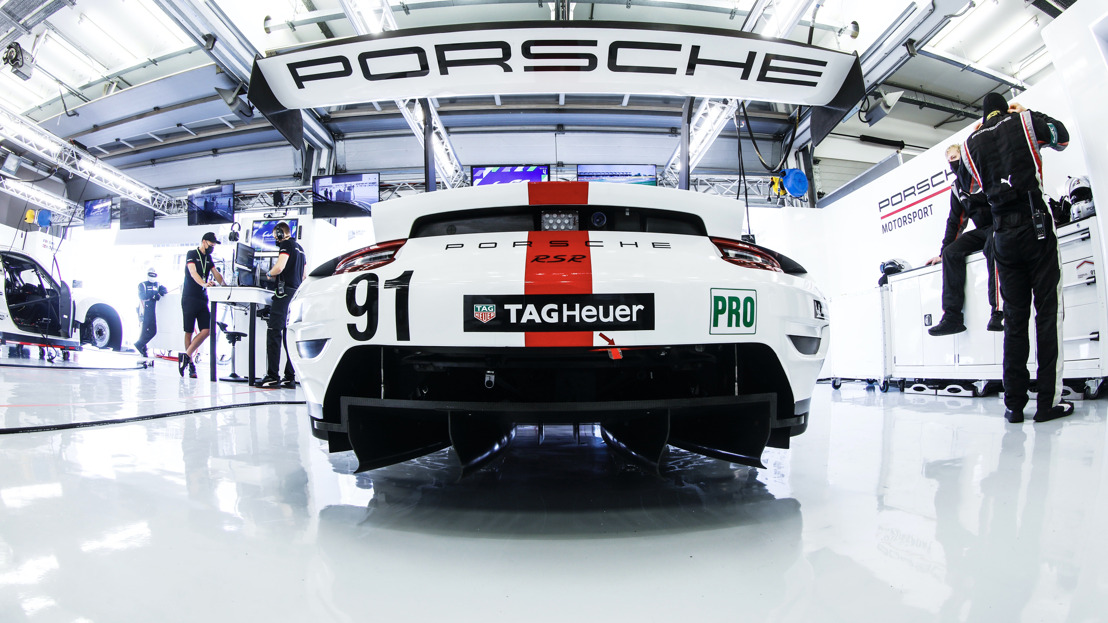 The workshops of the Manthey operations team have been standing near-empty since September 6th: On that day, WEC logistics partner DHL picked up five shipping containers, each a good twelve metres long, and dispatched them to Bahrain from the Belgian port city of Antwerp. These containers hold the equipment for the two races in the island nation, including the two Porsche 911 RSR and two safety cars, which are also serviced and maintained by Manthey. Only for the highlight of the season, the 24 Hours of Le Mans, does the team need more equipment. As the crow flies, Le Mans in France is just 556 kilometres away, while Bahrain is a 4,558-kilometre trip. Nevertheless, the transport efforts remain surprisingly manageable.

“From a logistics perspective, back-to-back races on the Persian Gulf are much easier than one race in Fuji and one in Bahrain,” states team manager Bernhard Demmer. Originally, the FIA WEC racing calendar had planned one race each in Japan and Bahrain at the end of the year. Especially in terms of customs clearance in the two countries, this would have resulted in significantly more effort. “In Bahrain, everything is handled as ‘temporary import’: the material is only imported for a short period of time and then the exact same material is exported again. It’s noticeably easier to organise,” explains Demmer. “In Japan, the freight enters the country via the so-called ‘ATA Carnet’. This requires, among other things, a guarantee from the Chamber of Industry and Commerce, as well as many signatures and stamps. All in all, it’s a significantly greater effort,” says the team manager, who goes by the name of “Berno.” He continues: “Due to the tight time frame, we would also have had to transport our cars and equipment to Fuji via air freight. That would’ve been seven to ten times more expensive than shipping them over the ocean.”

Because of this arrangement at the end of the season, the Porsche GT Team not only saves money but also labour in some areas. The pit equipment does not have to be set up and dismantled between the two races, hence there is no need to load and pack twice. The vehicles are serviced in the well-equipped garage between the two events. The entire crew will spend a total of 14 days in the Middle East. “There are certainly worse places than Bahrain for such a situation,” Demmer says with a smile. “The people there are friendly, the hotels are first class and the conditions at the track are ideal. Additionally, everyone can get their fix of sun and warmth there before the European winter.”

“The first race ends on Saturday evening, followed by four days in which the cars have to be maintained – and there is time for the crew to take some deep breaths,” reports Alexander Stehlig, Head of Operations FIA WEC. He adds: “It is our task in team management to give everyone in the squad the freedom to take one of the days off. That way we can also prevent cabin fever. In addition, at a doubleheader event like this, we have to divvy up our workforce well.” The work schedule is similar to that of the 24 Hours of Le Mans in 2021. This year’s event in France kicked off with the official test day. The endurance classic started six days later – a streamlined yet gruelling programme. In Bahrain, the two races add up to a total of 14 hours of racing, plus a rookie test day on the Sunday after the season finale. The Porsche GT Team has a plan that includes both intensive work and much-needed breaks. If both Porsche 911 RSR cross the finish line in the first race without any major damage, the vehicles will be serviced on Sunday and Monday morning. The team would then have around 24 hours of free time. The fine-tuning and aligning of the cars will not take place until Tuesday afternoon. The first session of the second weekend begins on Thursday.

“One thing is important – and it’s often overlooked: If you fly home between two races, like in Fuji and Bahrain for example, it’s like pushing a reset button. Automatically, the crew would be fully concentrated on each of the race weekends,” says Bernhard Demmer. “We have to achieve the same effect at this upcoming back-to-back event, even though it’ll seem like one long event. We all have to divide our concentration and energy optimally because these last two races are about nothing less than the championship,” outlines the team manager.
“This is exactly where it becomes a bit of an experiment because we’ve never experienced this format before,” adds Alexander Stehlig. “I see a particular focus on the engineers in this situation. They have to follow up, analyse and prepare everything within four days, where they would otherwise have two or three weeks to do this. There’s no way we could train for that. We contest six FIA WEC races each season, unlike, for example, NASCAR, where 36 races are held virtually one weekend after the other. The crews there are much more used to compact analyses and race preparation.”

“Even if we win the first race, the drivers and engineers will still find things that we need to optimise,” says the FIA WEC Head of Operations. With a smile, he adds: “I was a race engineer myself for a long time. I know that we like to calculate to the second decimal place, even though the first would be enough. That’s how we work – and it’s a good thing. Still, we have to manage our workload effectively in this area as well. So, an engineer should allow himself three hours of downtime, too.”

The meticulous attention to detail in the Porsche GT Team includes seemingly everyday essentials. Team manager Bernhard Demmer had two of these ‘essentials’ securely packed up and sent to Bahrain. “We have a washing machine and dryer in our luggage,” he grins. For context: With such a lengthy event, the team and drivers’ clothing have to be cleaned every now and then – especially in the sweltering heat of the desert. “With a third-party laundry service, like a hotel, you always run the risk of things coming back a size smaller. We’d rather wash our own clothes,” laughs Demmer.