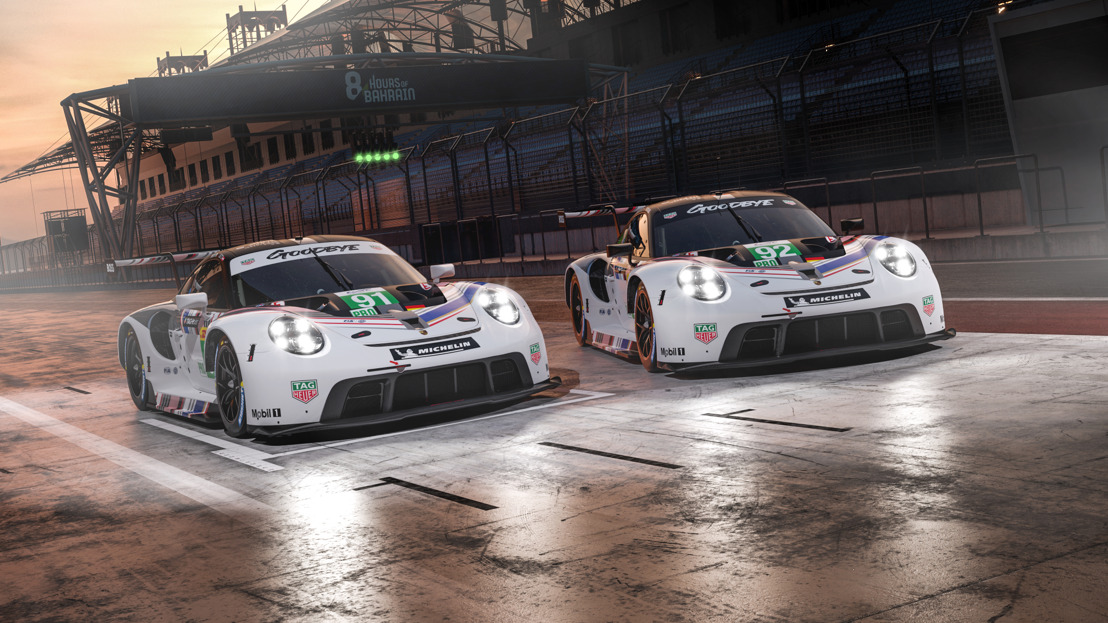 The two 911 RSR fielded by the Porsche GT Team will bid farewell to the GTE-Pro class of the FIA World Endurance Championship WEC sporting a very special livery. At the final round of the season in Bahrain, the two nine-elevens will be decked out in striking colours from ten years of competition with the ca. 378 kW (515 PS) GT racing car – from the classic Porsche Motorsport design through to the beloved “Pink Pig”. The eight-hour race will be contested on the track in Sakhir on 12 November.

Stuttgart.Set against the white base coat, the two 911 RSR fielded by Manthey will feature vivid red, blue, pink, black, gold and grey stripes on the front, sides and rear wing. On the windscreen, the word “goodbye” is emblazoned in bold lettering. The 16 class victories achieved since 2013 are immortalised on the fenders of the two nine-elevens. Written on the roof are the names of all drivers from the last ten years of factory racing, along with the word “goodbye” in the national language of the respective world championship venues where the 911 RSR raced.

“Our racing cars will be truly eye-catching at the final round of the FIA WEC. I’m very much looking forward to seeing how the fans react,” said a delighted Thomas Laudenbach, Vice President Porsche Motorsport. “The GTE-Pro class of the World Endurance Championship will be phased out at the end of the 2022 season. So, this will be the swan song event with the works team’s 911 RSR. For this very special occasion, our designers have created a foil wrap that, in my opinion, wonderfully represents the history and successes of the last decade. And the icing on the cake will come in Bahrain: We’re aiming to win the race as well as the manufacturer’s and driver’s titles.”

“The season finale in Bahrain evokes a lot of emotion for the whole team,” says Alexander Stehlig, Director Factory Motorsport FIA WEC, ahead of the final appearance of the 911 RSR works squad. “In recent, years, the mechanics, engineers and drivers have experienced many highlights in the GTE-Pro class. Our Porsche 911 RSR was always one of the most distinctive, popular and successful racing cars in the fiercely contested manufacturer team category. As this great programme comes to an end, we’d like to add another highlight – in both a sporting and optical sense. I think we’ve created the perfect design. It is the ideal combination of modern styles and historic colours.” ​

The chapter of the works team in the GTE-Pro class closes with the 62nd race since 2013: The category will be shelved next year. The Porsche 911 RSR will continue to race in the FIA WEC. In 2023, customer teams will field the proven racer in the GTE-Am class. From next year, the sports car manufacturer from Stuttgart will tackle the new season of the World Endurance Championship and the North American IMSA WeatherTech SportsCar Championship with the Porsche 963 under the banner of Porsche Penske Motorsport with the intention of claiming overall victories, most notably at the classics in Le Mans, Daytona and Sebring.