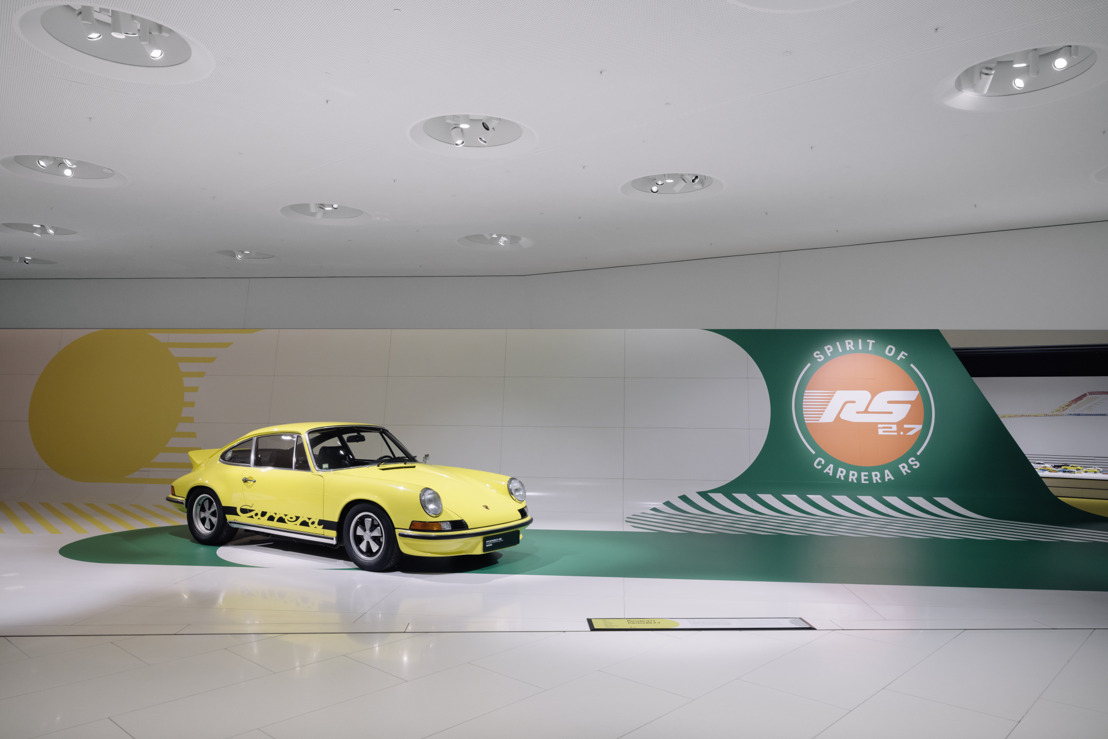 Stuttgart. The Porsche 911 Carrera RS 2.7 is an undisputed icon of automotive history, unique and unforgettable. Fifty years after its world premiere, the Porsche Museum is honouring it with a special exhibition, “Spirit of Carrera RS”. Starting on 20 September 2022, the Porscheplatz in Zuffenhausen will be all about the “ducktail”, “RS” or “2.7”, as the sports car is known among Porsche enthusiasts.

When the RS was unveiled at the Paris Motor Show on 5 October 1972, it was the first series-production car in the world with front and rear spoilers. The requirements for the 911 base vehicle for racing and rallying were clearly defined: light and fast were the watchwords. To achieve the objectives, Hans Mezger and Valentin Schäffer developed the 2.7-litre six-cylinder boxer engine with direct fuel injection from the ground up new. In the Sport version, the 210-PS, 960-kg Coupé went from 0 to 100 km/h in 5.8 seconds and topped out at almost 245 km/h. The precise aerodynamics designed back then with racing cars in mind still make the RS unique today. “It’s the most direct technology transfer from motorsport to series production that ever occurred. Nothing about this has changed to this day and it is part of a modelled tradition at Porsche,” says Head of GT Vehicles Andreas Preuninger.

The Porsche Museum tells the story of the RS and its racing cousin, the RSR, not only through the cars and anecdotes, but also with films, photos, racing posters and interactive features. Visitors can, for example, put together their own custom RS by turning the model-detail and colour wheel of the kaleidoscope. To fulfil as many personal wishes as possible, Porsche held fast to the customisation principle with the Carrera RS 2.7. Buyers could choose from a wide array of colours and equipment options. The strong demand took the sports car manufacturer by surprise, which initially had planned a mere 500 series-produced cars for homologation. At the centre of the special exhibition is a bright yellow 911 Carrera RS 2.7 in Touring spec, as well as a rare prototype in green metallic. The vehicles, development documents, advertising brochures, price lists, the Carrera logo and an article from the customer magazine
​Christophorus describe the path from the development vehicle to the production-ready Porsche.

Visitors can also look forward to seeing other extraordinary cars from the family lineage of the ducktail spanning five decades of Porsche history. With the duo of the 911 (964) RS and 911 (993) RS, Porsche expanded the RS family to include air-cooled sports cars. The water-cooled era is represented by the 911 (996) GT3 RS, 911 (997) GT3 RS, 911 (991) GT3 RS and 911 (992) Sport Classic models, the last of which is a collector’s edition from the Heritage Design Series from Porsche Exclusive Manufaktur and features a fixed rear spoiler. The car’s moniker from the realm of avian anatomy was inspired by the shape of the rear spoiler. At high speeds, the ducktail presses the 911 to the ground and thus reduces lift to achieve the ideal balance and enable higher top speeds. With the RS half a century ago, the sports car manufacturer achieved the perfect synthesis between weight, power, aerodynamics and driving dynamics. Light, fast, race-ready and road-approved.

The Porsche Museum is open Tuesday to Sunday, from 09:00 to 18:00. You will find the current hygiene specifications on the website: https://www.porsche.com/germany/aboutporsche/porschemuseum/

For more information about the history of the car, as well as film and photo material, feel free to visit the online portal dedicated to the911 Carrera RSn2.7 (porsche.com).