Impressive performances in the GT works campaign and during testing of the Porsche 919 Hybrid have earned two drivers a spot in the LMP1 squad. This season, Nick Tandy (Great Britain) and Earl Bamber (New Zealand) will tackle Spa-Francorchamps as well as the Le Mans 24 Hours at the wheel of the innovative sports prototype. Teaming up with Formula 1 pilot Nico Hülkenberg (Germany), the pair tackles both races in a third 919 Hybrid.

Earl Bamber, who received support as part of Porsche’s youth development programme, managed to climb the career ladder into the top tier of long distance racing in record time. After winning the Porsche Motorsport International Cup Scholarship shootout, he went on in 2014 to clinch the title in the Porsche Mobil 1 Supercup as well as in the Porsche Carrera Cup Asia for the second time since 2013. Furthermore, the “Kiwi” won two rounds of the Carrera Cup Deutschland and secured second place at Petit Le Mans at Road Atlanta, one of the long distance classics in the USA. These successes earned him a contract as a works driver just prior to the 2015 season and he then quickly climbed the next step on the ladder into the LMP1 programme. In addition to his commitments at the wheel of the 919 Hybrid at Spa-Francorchamps and Le Mans, Bamber tackles the Tudor United SportsCar Championship in the USA and Canada with the 911 RSR.

“Receiving support from Porsche was the chance of a lifetime as a race driver,” he said. “I’ve reached new levels in every aspect and I’ll do my utmost to justify this trust again this season.”

Nick Tandy also celebrated his first great success in Porsche brand trophy racing. In 2010 he contested the Porsche Mobil 1 Supercup and the Carrera Cup Deutschland where he promptly snatched vice-championship honours in both series. In 2011 he secured overall victory in the Carrera Cup Deutschland and the following year picked up the Porsche Cup as the most successful private Porsche driver in the world. 2013 saw him promoted into the factory pilot squad and he went on to win Petit Le Mans as well as 2014 season-opener at the Daytona 24 Hours and the WEC race in Silverstone. He too will continue contesting GT races with the 911 RSR parallel to his LMP1 engagement.

“Their rise into the premier class of long distance racing not only confirms the effectiveness of the Porsche youth development concept. It also underlines the importance of Porsche’s brand trophy series as a career stepping stone for young race drivers who bring the necessary talent, a great willingness to learn and the critical will to succeed. Porsche opens all doors to those who are really fast.”

Four pilots contesting this year’s WEC season as part of the LMP1 driver lineup began their careers in Porsche’s one-make race series. In addition to Earl Bamber and Nick Tandy, Timo Bernhard and Marc Lieb climbed the ranks via the Porsche youth development programme to join the circle of the world’s best sports car pilots. These four have one thing in common: Over the course of their careers, they have all won either the Porsche Mobil 1 Supercup or the Carrera Cup Deutschland: Timo Bernhard clinched the Porsche Carrera Cup Deutschland title in 2001 as a Porsche junior, Marc Lieb the following year, also as a Porsche junior. Nick Tandy achieved this feat in 2011, with Earl Bamber taking home the Porsche Mobil 1 Supercup trophy in 2014. 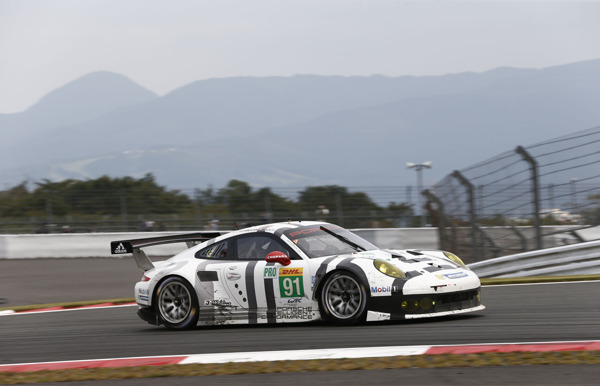