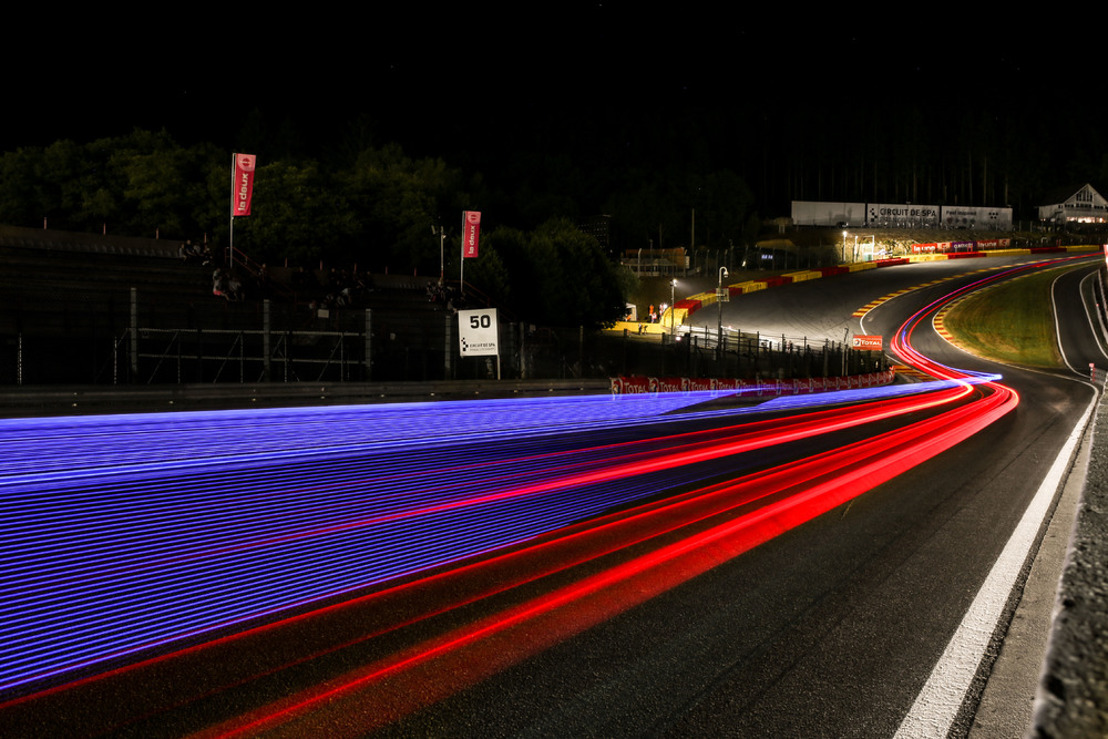 Exiting the La Source hairpin, Porsche factory driver Laurens Vanthoor plants his foot on the accelerator. The 500+hp 911 GT3 R catapults out of the first corner of the Circuit de Spa-Francorchamps, accelerating rapidly down the 15 per cent decline. After a very fast right-hand kink, the Belgian hugs the white wall, which separates the old pit lane from the circuit and now echoes the sound of the high-revving flat-six. There it looms in the distance: the famous Eau Rouge of Spa-Francorchamps. Flat out or not? “That’s always a tricky question until you dare to do it for the first time,” says Vanthoor with a laugh. Here on his home turf, known in the racing world as the “Ardennes rollercoaster”, he has celebrated a good number of successes.

During the 24 Hours of Spa-Francorchamps on 24/25 October, drivers will face the Eau Rouge challenge every single lap. This corner combination, which is officially known as “Raidillon”, owes its now famous name to a nearby small creek. The high iron-bearing water is tinged red – “Eau Rouge“. In the hunt for top qualifying times on fresh tyres and a dry track with just a dash of fuel in the tank, many drivers take the legendary passage flat out. However, the situation in the race is different. The rubber must be handled carefully in order to survive many laps. Over 24 hours, the car will cover a distance of more the 2,500 kilometres. Tipping the scales at more than 1,200 kilos plus driver and fuel, the total weight of the car is significantly higher than in qualifying. Hence, the forces are higher.

“I don’t know of a comparable passage anywhere. Eau Rouge is unique in the world,” explains Sebastian Golz, Project Manager Porsche 911 GT3 R. On the legendary circuit nestled in the countryside of Belgium’s Ardennes region, a huge compression is combined with cornering at high speed. “On the Nürburgring Nordschleife, the cars also bottom out at the lowest point of the Fuchsröhre passage. But we don’t have the lateral forces there,” says Golz. After the downhill section with its 15 per cent gradient comes a left-hander at the lowest point followed by a sweeping, fast right-hand corner leading to a steep climb and the final left-hand kink through a gradient of 18 per cent. Visibility is very limited. For a short period of time, drivers see only sky and some treetops. “When you negotiate this passage for the first time, it’s a truly nail-biting experience, but you get used to it,” says Vanthoor.

“At around 240 km/h, not only the drivers but many components come under extreme stresses,” explains Golz. “Through the dip at Eau Rouge, the tyre gets extremely compressed, and at the same time lateral forces of up to 3.0g deform the tyre sidewalls. With the GT3 R, this means that around five tonnes is pushed to the outside of the corner. In the compression, the vehicle briefly bottoms out at up to 2.5g. The tyres alone can’t absorb these forces. The rims distort and even the chassis seems to groan under such loads. Thankfully, our Porsche 911 GT3 R has a stiffer design compared to some other GT3 vehicles. We’ve seen the chassis of cars breaking when they hit the dip down at Eau Rouge.” As part of the successful Porsche 911 GT3 R’s overall concept, forces are distributed evenly over the chassis without overloading certain areas. All components play a part in reducing the amount of energy that impacts the vehicle. When driving through Eau Rouge, the setup of the kinematics plays an extremely important role.

“For rapid changes of direction, the car should have quite a hard setup but this would never work through Eau Rouge,” explains the Porsche project manager. “Through the massive compression, high forces cause massive load changes. A hard setup might result in having one wheel in the air without surface contact. This should never happen there. You need all wheels on the ground for maximum grip.” Hence, a compromise is needed. If the car’s suspension is too soft, it will bottom out badly in Eau Rouge. “It’s not the shocks reaching their limit – we can do something about that. It would be much more serious if the entire chassis bottoms out. This would minimise the wheel load and reduce the grip significantly. We’ve got to find a good compromise to ensure maximum contact of all wheels on the ground at all times,” states Golz. When working on finding the best setup, the unique features of Eau Rouge play an important part. However, it is also essential to take the rest of the 7.004-kilometre circuit into account.

For fast corners like Pouhon or Blanchimont, a low ride height is essential for high and constant downforce. Passages with rapid directional changes like Les Combes or the Bus Stop chicane require a hard suspension in order to achieve decent lap times. All this contradicts the set-up requirements for the perfect drive through Eau Rouge. “You’re always looking for the best possible compromise,” says the experienced Porsche engineer. “I can live with the car bottoming out slightly in Eau Rouge because I want the car low through other passages. One shouldn’t forget, the lap time doesn’t just depend on Eau Rouge – it is achieved over the entire seven kilometres. If I get it sorted out right for the Eau Rouge dip, I’ll lose too much time in other places like Blanchimont,” remarks Golz. With a laugh, he adds: “It’s always a huge challenge. It’s a brave driver who keeps the throttle pedal down through here. Unlike in single-seater racing, this hasn’t changed at all over the years in GT3 sport. “

Mastering this key passage takes skill, enormous self confidence, a wealth of experience and a huge amount of courage. “It may sound strange but Eau Rouge is easier to take at full throttle than lifting for half a second,” says Vanthoor. “At this spot, the driver has to be absolutely sure about what his car is doing. If I lift the throttle approaching the lowest point, the load shifts to the front – and the car pitches. This affects the steering behaviour and I might hit the kerb too hard. If this happens, things get seriously tricky. As a driver, you’ve got to learn Eau Rouge by driving it. Everyone knows that aerodynamics offer more downforce at a higher speed. Obviously you shouldn’t try to overdo it, but with the Porsche 911 GT3 R, you can keep the pedal to the metal – most of the time. It doesn’t always work – sometimes your gut tells you that it would be a good idea to lift for a split second.”

“On one hand, we technicians like to see the drivers going full throttle through Eau Rouge. After all, we’re passionate about motor racing,” says Golz, giving his perspective. “Yet on the other hand, it’s obvious that neither the tyres nor the vehicle would withstand these stresses over long periods of time. So we’re quite happy that the enormous physical and mental stresses through this passage keep the drivers from trying to tackle it at full tilt most of the time. This saves the material a little,” concludes the 911 GT3 R project manager, thereby taking a load off the shoulders of his very ambitious drivers. There have been many accidents in this challenging passage. Eau Rouge only works well if all factors come together. Tyre pressure and temperature must be perfect, the track surface dry and clean, and the approach to the dip flawless.

“Actually, your first tweak of the steering wheel as you head towards the dip is the decisive moment,” says Vanthoor. “If this isn’t perfect you have to correct it, and that’s anything but easy at 240 km/h with those mighty forces working on the car. Eau Rouge is mercilessly unforgiving. The run-off zones are small; many drivers hit the crash barriers. Still, there’s hardly a better feeling for us drivers than hurtling through this passage at full throttle. You look forward to it every lap – at least as long as everything works out okay,” the Belgian smiles. The famous corner combination at Spa-Francorchamps is like a trophy to be won at the highest possible speed. After two attempts to master the famous passage at full throttle ended in the barriers, an ex-Formula 1 world champion had the words “I survived Eau Rouge” printed on his autograph cards.