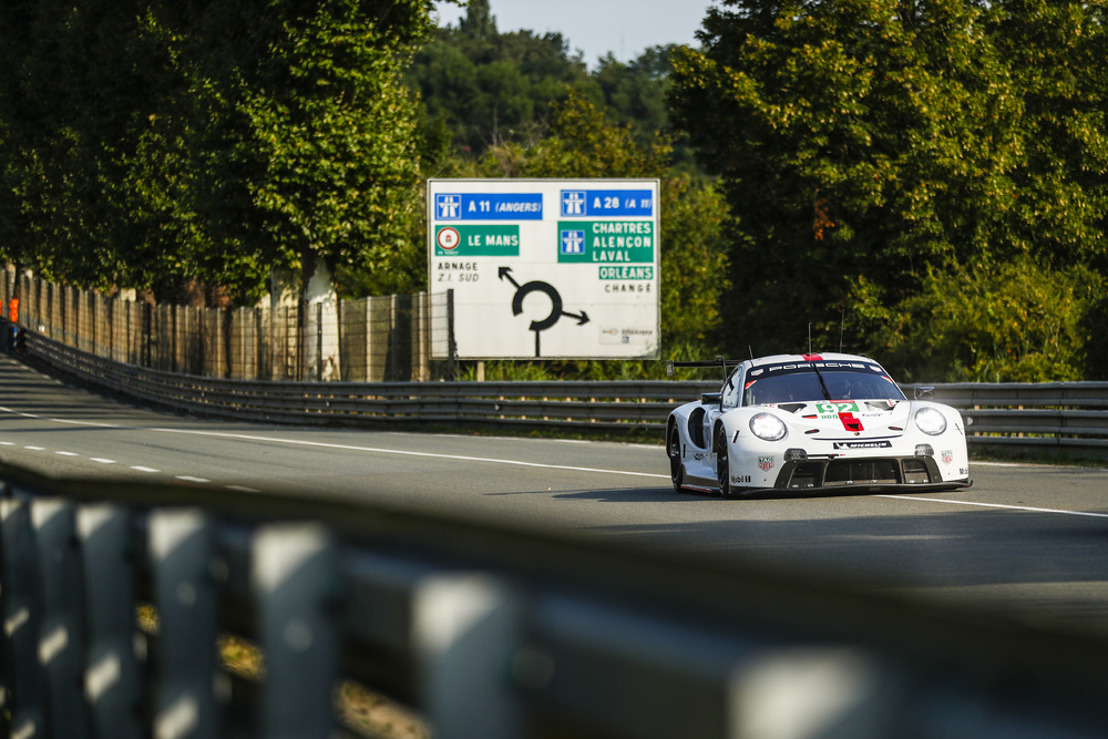 While three drivers share the extremely strenuous workload in each of the cockpits at the 24 Hours of Le Mans, the vehicle has to endure the tortures of the world’s toughest long-distance race alone. In the intense competition at the Sarthe, people and, above all, machines reach their absolute limits. “Of course, our Porsche 911 RSR is designed for this – we developed this vehicle for extreme endurance runs,” explains Alexander Stehlig, Head of Operations FIA WEC. “The car’s components are designed and extensively tested with these challenges in mind. We carry out a lot of test bench work and assess the entire package in numerous test and development runs. Theoretically, a 24-hour race shouldn’t be a problem. But in practice, this sometimes looks a bit different.”

“Our cars have to cope with around 20,000 gearshifts over the race distance,” says Romain Gineste, senior performance engineer in the Porsche GT Team. “Don’t forget: the race isn’t everything – the gearbox has to do its job in every practice session and qualifying.” In previous years, all teams installed a completely new drive train on the Friday of the Le Mans week, but since 2018 the components must remain in the vehicle for the entire race week. “That was a consideration for us,” states Alexander Stehlig, “because we also have to constantly keep an eye on the workload on our team. We swap out the parts after the pre-test and leave them in the car until the end of the event. This allows the mechanics to focus on the essentials on the Friday so that they are able to give their best during the very long race. This has absolutely proven its worth for us. Many of the other teams do the same thing.”

This operational plan means that the transmission in the Porsche 911 RSR, for example, has to execute almost 7,000 more gearshifts, which must work flawlessly at all times – and at lightning speed. In the sequential six-speed gearbox of the nine-eleven, a gearshift takes a mere 15 milliseconds. The high torque of the 4.2-litre boxer engine thus thrusts the Weissach racer forward with almost no interruption. “Our current RSR doesn’t use a pneumatic system to change gears like its predecessor, but an electromechanical one. This works more precisely, and above all, faster,” explains Alexander Stehlig. “We are really, really good in this regard,” grins Romain Gineste: each of the approximately 28 million spark-plug firings in the six-cylinder engine should translate to maximum propulsion during the 24-hour race.

Those who brake late are faster for longer: this was the mantra of Porsche when they developed the braking system for the 911 RSR. At Le Mans, this system comes to the fore at 13 places per lap. Time and time again, the drivers stomp on the brakes as they hurtle towards the narrow passages such as the two chicanes on the famous Mulsanne straight, or at the entrance to the Mulsanne curve. In total, they depress the left pedal about 4,000 times during the race. In these moments, the temperatures of the brake pads and steel brake discs soar to over 400 degrees Celsius. Sophisticated ventilation cools the system down again within a few metres. “The brakes reach their absolute limit in the 24-hour race. The systems are so good now that we can manage with just one brake service at Le Mans,” reports Alexander Stehlig. The experienced engineer wants to avoid any possible risks: “We always play it safe and at least change the brakes on the front axle. It doesn’t even cost us a minute because the parts are completely pre-assembled. We do this, for example, during a safety car phase without any major consequences to our position in the race.”

The six-cylinder power plant in the 911 RSR, which is tamed to about 515 PS through the Balance of Performance (BoP), is not the only boxer in the vehicle. Over the Le Mans 24 Hours, the shock absorbers have to take numerous hard hits without showing any visible cuts. Thousands of vibrations due to the uneven road surface are swallowed by the kinematics without complaint. “The system is compressed to its limit 20 times per lap when driving over kerbs. The car has to rebound every time. The damper system receives a total of almost 7,000 direct hits over the entire race distance,” says Romain Gineste, citing further impressive figures. Racing tyres from Michelin absorb some of the horizontal forces. Only 60 tyres may be used over the course of the challenging 24 hours in consistently dry conditions. At the end of this gruelling endurance run, when all of the components have done their job as required, the best-case scenario is a deserved reward: a big celebration at Le Mans.