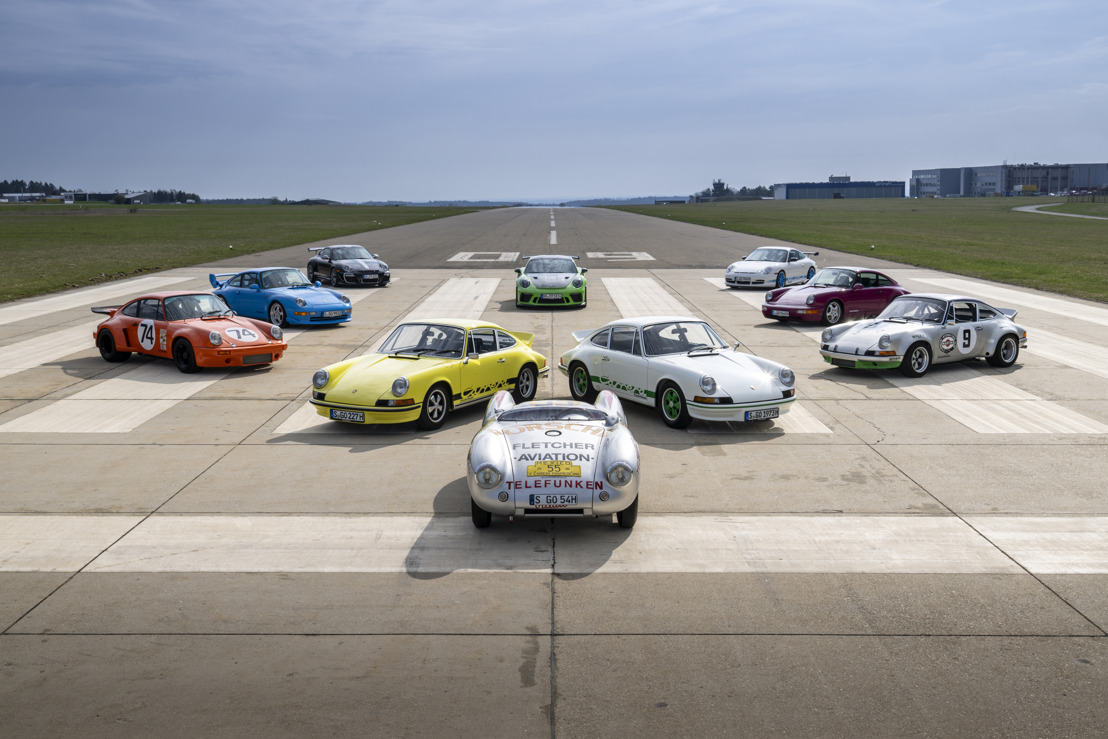 About 50 years ago, Porsche began with the development of the 911 Carrera RS 2.7. “The 911 Carrera RS 2.7 was intended as a homologation special. It was to be a very light, fast sports car,” recalls Peter Falk, who was then the Head of Testing for series production cars at Porsche. Even though the model variant was based on the 911, it ended up becoming a new base vehicle for racing and rallying that featured many technical innovations. The most powerful model of the first generation of the 911 was the first 911 to be christened ‘Carrera’ – the crowning glory of the Porsche range. Weight, aerodynamics, engine and chassis were all worked on intensively. Around 15 engineers developed the car from May 1972 onwards, and were joined by production staff.

Porsche initially planned to build 500 examples in order to homologate the 911 Carrera RS 2.7 for Group 4 Special GT cars. It became a road-approved vehicle for customers who also wanted to participate in racing events. On 5 October 1972, the new model was presented at the Paris Motor Show, which was held at the Porte de Versailles. By the end of that November all 500 vehicles had sold. Porsche was surprised by the car’s success, and was able to triple the sales figures by July 1973. A total of 1,580 examples were built, and once the 1,000th vehicle had been made, the Porsche 911 Carrera RS 2.7 was homologated for Group 3 as well as Group 4. The optional M471 equipment package led to Porsche building 200 lightweight ‘Sport’ versions of the car. A further 55 examples of the racing version, 17 base vehicles, and 1,308 touring versions (M472) were built.

The interior of the 911 Carrera RS 2.7 ‘Light’ (M471) was pared back to the essentials, according to the customer’s requirements and the production date. Among other things, the rear seats, carpets, clock, coat hooks and armrests were omitted. Upon request from the customer, two lightweight seat shells replaced the heavier sports seats. Even the Porsche crest on the bonnet was initially glued on. Compared to the ‘Touring’ equipment package (M472), the ‘Sport’ weighed 115 kilograms less, with a kerb weight of 960 kg. It was priced at 34,000 German marks. The Sport package (M471) cost 700 German marks, while the Touring package (M472) was 2,500 German marks. The equipment package that was chosen therefore defined the respective version of the 911 Carrera RS 2.7.

The car’s 2.7-litre flat-six fuel-injected engine produced a powerful 210 PS at 6,300 rpm and developed 255 Nm at 5,100 rpm. This enabled the Sport version to accelerate from 0 to 100 km/h in 5.8 seconds, making the 911 Carrera RS 2.7 the first production car to break the six-second mark set by the German trade journal ‘auto, motor und sport’. The top speed crossed the 245 km/h mark. (Touring 6.3 seconds, 240 km/h). The RS 2.7 became the ideal synthesis between weight, performance, aerodynamics and handling.

The first with a rear spoiler

The body was all about weight reduction. Thin sheet metal, thin windows, plastic parts and the elimination of insulation helped to decrease the total vehicle weight of the racing cars to less than the 900 kg required for the new model to be homologated. At the same time, the aerodynamics were improved. The aim was to minimise lift on the front and rear axles at high speeds in order to achieve more neutral handling. For the first time, engineers Hermann Burst and Tilman Brodbeck, together with stylist Rolf Wiener, developed a rear spoiler, testing it in the wind tunnel and on test tracks. The aim was to retain the formal closed bodystyle of the 911, to compensate for the drawbacks of the sloping rear by means of suitable and stylistically appropriate measures and to improve the aerodynamics of the 911.

The elevation of the new duck tail pushed the 911 Carrera RS 2.7 closer to the road when the car was driven at speed and supplied the rear engine with additional cooling air. The effect was achieved without any increase in drag; in fact, its top speed increased by 4.5 km/h. “During tests, we found that with a taller spoiler we could increase the top speed due to the decrease in drag. So we kept raising the rear spoiler upward by millimetres with sheet metal at the tear-off edge until we found the reversal point at which the drag increased again,” explains Falk. On 5 August 1972, the three Porsche employees filed the patent disclosure document No. 2238704 with the German Patent Office.

The engineers also set to work on the chassis. Porsche had experience by this stage of racing with wider rear wheels, so the development engineers tried this out on the 911 Carrera RS 2.7 as well. “We wanted to improve traction and handling with wide tyres on the rear axle because the greatest weight is found on the rear axle,” recalls Falk. For the first time at Porsche, a series production car featured different tyre sizes on the front and rear axles. Fuchs forged 6 J×15 wheels with 185/70 VR-15 tyres could be found at the front, 7 J×15 with 215/60 VR-15 tyres at the rear. To make them fit, Porsche widened the body by 42 mm at the rear near the wheel arches. “When this worked well in development, production and sales, all subsequent models were fitted with this combination,” Falk continues.

Following the change in regulations for sports prototypes, which prevented further development due to the new three-litre displacement limit, Porsche ended a very successful era. After the racing debut of a 911 Carrera RSR (racing-sport-racing) with a significantly widened body at the Tour de Corse in November 1972, Porsche decided to begin a new chapter in the success story of the 911 in 1973. In early February of that year, an RSR piloted by Peter Gregg and Hurley Haywood crossed the finish line at the 24 Hours of Daytona with a 22-lap lead. It was a brilliant start to the new season. Herbert Müller and Gijs van Lennep won at the Targa Florio in May 1973. “The victory was important for us because it showed that the RSR with the larger rear wing was very fast on circuits and rally stages,” recalls Falk. In its first season, the 911 Carrera RSR won three international and seven national championships – providing the foundations for the success of the 911 for decades to come. At the International Race of Champions (IROC) held in October 1973, Roger Penske from the US fielded 12 identical 911 Carrera RSR 3.0 cars in which drivers from different racing classes competed against each other.

With the 911 Carrera RS 2.7, however, Porsche was not only developing a sports car for the racetrack, but a car that customers could use both as a daily driver as well as for racing. It took the grand touring car to the racetrack. Contemporary advertising described it thus: “Its repertoire: by road to the race and home again. Monday to the office. Tuesday to Geneva. Back in the evening. Wednesday shopping. City. Traffic jam. Creeping traffic, but no soot on the plugs, no complaint from the clutch. Thursday country roads, motorway, switchbacks, dirt roads, construction sites, Friday only a short distance and repeated cold starts. Saturday with holiday luggage to Finland. Carrera RS – full of inexhaustible reserves in sprints and marathons.”

For the first time, the ‘Carrera’ script adorned the side view between the wheel arches on the 911 Carrera RS 2.7. The Spanish word translates as ‘race’ in English, and RS on the rear spoiler stands for ‘Rennsport’, or racing. For Porsche, the ‘Carrera Panamericana’ was the inspiration for the new name. In 1953, Porsche claimed its first-class victory in the endurance race with the 550 Spyder. Then, in 1954, it finished third overall – a sensation that sparked the new addition to the name. ​ In the years that followed, Porsche used the name Carrera for the most powerful vehicles with the 1954 four-camshaft/Fuhrmann engine, such as the 356 A 1500 GS Carrera or the 356 B 2000 GS Carrera GT. The Carrera script adorned the rear of the Porsche 904 Carrera GTS from 1963, and on the 906 Carrera 6 from 1965 it could be found on the wing behind the front wheel arch. According to statements made at the time, Carrera was also understood to be a “quality predicate for a technical delicacy that had proven itself on racetracks and rally circuits”. In short, it was the ideal name for the future top-of-the-range model of the 911. “We wanted to assign the already famous name ‘Carrera’ to a production model and thought about how we could best represent that,” recalls Harm Lagaaij, who was a designer at Porsche at the time. They decided on the area between the wheel arches.

In addition to the Carrera lettering, Porsche had other eye-catching design features to offer: 29 paint tones were available, some in striking colours, and 27 were produced, including colours such as Bright Yellow, Red and Blood Orange. Porsche also fulfilled individual customer colour requests. The colour of the rims matched the body or the Carrera lettering on the sides of, for example, white vehicles with red, blue or green lettering. The lettering retains its pre-eminent significance to this day, as does the long-famous RS abbreviation. It is found again and again on the most sporting 911 models – as it was almost 50 years ago.