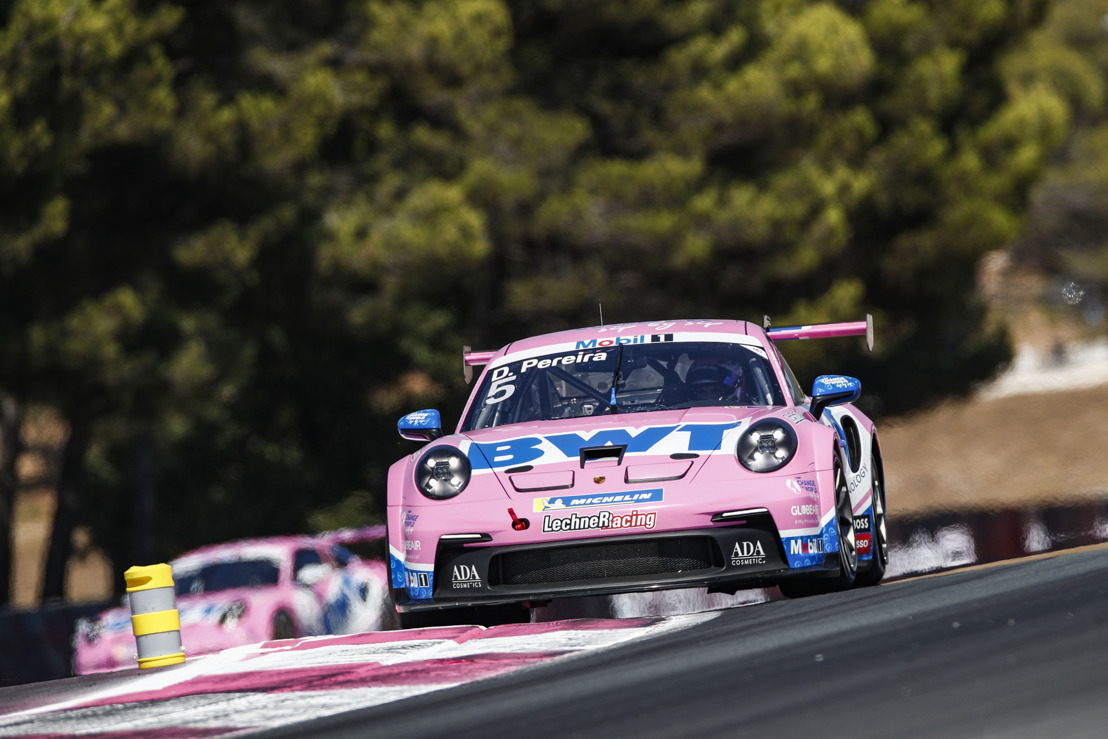 The tension in the fight for the Porsche Mobil 1 Supercup title continues to build: ahead of round six at Belgium’s Spa-Francorchamps, the five best-placed drivers in the overall classification are separated by just 19 points. Theoretically, defending champion Larry ten Voorde from the Netherlands, Porsche Junior Laurin Heinrich from Germany, Harry King from the UK and Bastian Buus from Denmark have a chance to shunt the points’ leader Dylan Pereira from Luxembourg off his throne. Round six of the Supercup season takes off on Sunday (28 August 2022) at 12:05 pm CEST just before the Formula 1 Belgian Grand Prix. ​

Stuttgart. With three races left on the 2022 calendar, the battle for the Porsche Mobil 1 Supercup title heats up. A leading pack of five drivers have pulled well clear of the rest of the field in the overall rankings of the international one-make cup contested with the Porsche 911 GT3 Cup. Dylan Pereira travels to round six in Spa-Francorchamps (Belgium) this coming weekend as the series leader. Thanks to his wins in Imola (Italy) and Spielberg (Austria), among other point-scoring results, the BWT Lechner Racing driver has eked out a narrow four-point advantage over Porsche Junior Laurin Heinrich. Competing for the SSR Huber Racing squad, the German has clinched one victory at Silverstone in England so far this season. The GP Elite driver from the Netherlands, Larry ten Voorde, currently ranks third overall. The reigning Supercup champion won the race in Monaco.

Harry King from the UK in fourth place is the only driver in the group of five who has not yet won a race. His BWT Lechner Racing teammate Bastian Buus turned heads at the previous race in Le Castellet (France): At just his fifth Supercup race, the Dane outpaced the rest of the field in his ca. 375 kW (515 PS) 911 for the first time. Thanks to this victory, the rookie has moved to within 19 points of the series leader Dylan Pereira in fifth place overall. With 25 points up for grabs for a race win, he too has joined the circle of title aspirants.

“The fact that five drivers from three teams are fighting for the championship lead shows just how fiercely competitive the Supercup is. I’m particularly pleased that the rookie Bastian Buus is in the top group,” states Oliver Schwab, the Project Manager of the Porsche Mobil 1 Supercup.

Thirty-two drivers have registered for the upcoming race at Spa-Francorchamps. The statistics show two favourites: Dylan Pereira and Laurin Heinrich. Pereira, the current series leader in the Supercup, clinched victory at the 2019 race on the Belgian Formula 1 circuit and also won the 300th anniversary race there in 2021. Almost four months ago, Porsche Junior Heinrich claimed a double victory in the Porsche Carrera Cup Deutschland doubleheader event on the 7.004-kilometre racetrack.

“In a way, this is a home race for me. I have many friends and sponsors coming to watch,” explains Pereira. “Plus, I like this track. Driving through Eau Rouge is always a lot of fun.” The Luxembourger has not yet decided how he would like to tackle the qualifying session, which determines the grid line-up and is normally critical in the Supercup. “Pole position isn’t necessarily crucial here – you often get others using your slipstream to overtake on the long Kemmel straight.”

Laurin Heinrich shares Pereira’s enthusiasm for the racetrack in the Ardennes. “It’s perhaps the biggest challenge on the Supercup calendar and I’m really looking forward to it. The unpredictable weather can make things even trickier. A perfect weather forecast is probably just as important as a good grid position,” the Porsche Junior asserts. Heinrich knows what he’s talking about: In the 2021 season, he achieved his first podium result in the Supercup at Spa-Francorchamps – in torrential rain, he catapulted from tenth on the grid to third place at the flag.

At its opening in 1921, the racetrack was a 15-kilometre triangular course consisting of public country roads between the towns of Spa, Stavelot and Malmedy. The first Belgian Grand Prix was held in 1925. The circuit hosted a Formula 1 race in the 1950 debut season of the championship. In 1979, safety issues led to the former “fastest open road circuit in the world” being shortened to a permanent racing circuit, which today measures 7.004 kilometres in the Grand Prix version. The latest upgrades have improved the run-off areas in the legendary Eau Rouge/Raidillon combination. Additional grandstands were added here and at other locations along the racetrack.

In its inaugural 1993 season, the Porsche Supercup made its first appearance at the Circuit de Spa-Francorchamps, which has earned itself the nickname “Ardennes rollercoaster” due to its hilly layout. In 2021, the 300th race of the international one-make cup was held here with the Porsche 911 GT3 Cup. Driving for BWT Lechner Racing, Dylan Pereira crossed the finish line first.

TV and internet coverage of the Porsche Mobil 1 Supercup