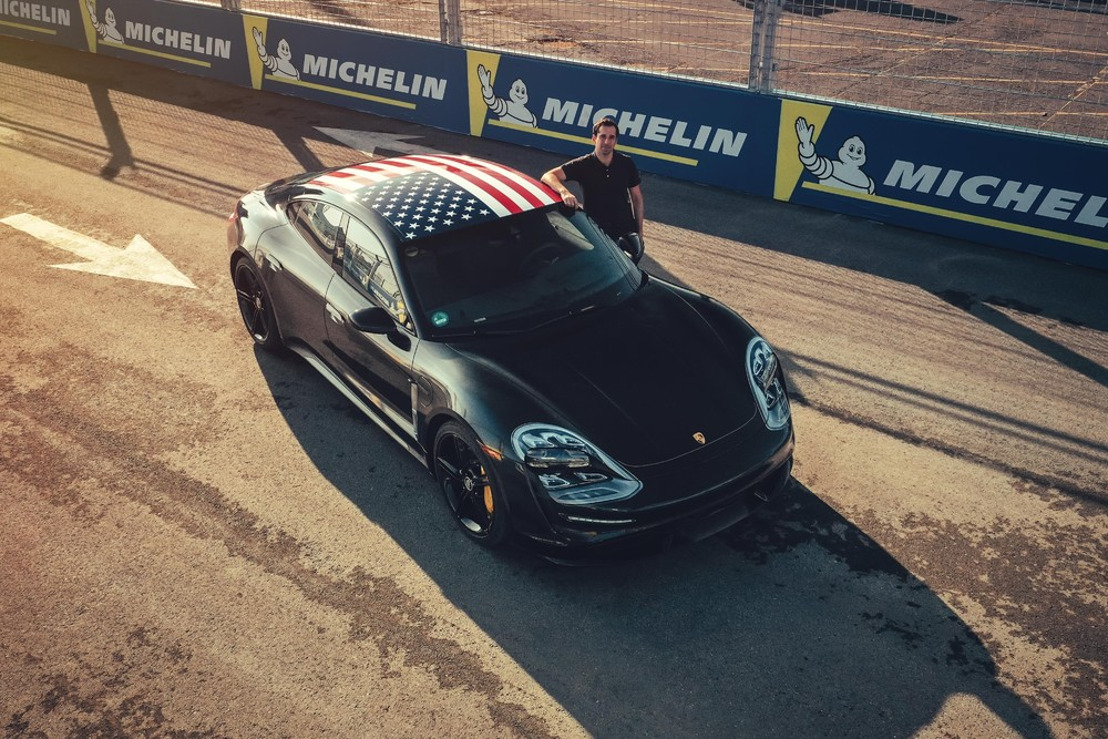 Monday, July 15, 2019 — Porsche visits the Big Apple: as part of the grand finale of the ABB FIA Formula E Championship in New York, the Taycan showed off its capabilities by completing several fast laps on the race circuit. “In Formula E, recuperation plays an important part in the race strategy. In a production car, intelligent energy recovery can make it possible to achieve significant benefits in terms of range,” explains Porsche works driver Neel Jani, who was behind the wheel in New York. “I was surprised by the long range of the new Taycan even when driven spiritedly round a race track. That is due to its performance-oriented battery and the sophisticated energy management system.”

Jani was also impressed by the outstanding development maturity of the new Taycan: “Like our Formula E car, it has a Porsche drivetrain that is designed for performance and reliability. No matter whether it is a racing car or a series-production model, it is extremely important to drive many miles in the test phase and to gain experience with the vehicle.”

The fast laps in New York represent the grand finale of the Porsche Triple Demo Run. A Taycan prototype has made three appearances on three continents in the space of three weeks, visiting China, Great Britain and the US – each important sales markets for the first all-electric sports car from Porsche. The livery on the roof paid tribute to each of the guest countries: in New York, the prototype featured a stars-and-stripes design.

The Chinese race driver Li Chao, who competes in the Porsche Carrera Cup Asia, drove the Taycan on the challenging handling track at the Porsche Experience Centre (PEC) in Shanghai. The former Formula 1 driver and current Porsche brand ambassador Mark Webber drove it up the hill at the Goodwood Festival of Speed in Great Britain.

The vehicle: the Porsche Taycan

The Taycan will be presented in September and will go on the market at the end of the year. Across the globe, there are already more than 20,000 serious prospective buyers for the four-door vehicle. The potential customers have put their names down on an option programme list and made a down payment.

Alongside the dynamic performance of the Taycan, a comprehensive charging infrastructure is key to the long-term success of electromobility. Porsche offers intelligent charging solutions for both the home and when on the road. The Porsche Charging System digital platform enables Europe-wide access to around 70,000 charging points from various providers and central billing via Porsche. In addition, both own fast charging stations and those installed in cooperation with charging networks such as Ionity in Europe or Electrify America in the USA are available.

Swiss-born Neel Jani (35) has been a Porsche works driver since 2013 and is the first confirmed driver who will compete for Porsche in the ABB FIA Formula E Championship in November 2019. Behind the wheel of the Porsche 919 Hybrid, he was the overall winner at Le Mans and the FIA World Endurance Champion in 2016. From 2014 until the end of the 2017 season, Jani achieved four wins, nine pole positions and four fastest race laps with the 919. In 2018, he set a lap record with the 919 Hybrid Evo at Spa-Francorchamps, beating the previous Formula 1 track record. Jani started his career in formula racing and progressed to become a Formula 1 test driver.

The setting is unique: the grand finale of the fifth Formula E season took place in New York City against the Manhattan skyline and with the Statue of Liberty in the background. The drivers mastered a technically demanding circuit in Red Hook, the port of Brooklyn.

With the countdown to the Porsche debut in the all-electric race series underway, the first steps have already been successfully completed: from Porsche drivetrain testing on the test rig, through construction of the Porsche Formula E vehicle and its roll-out on the test track in Weissach, right up to more than 1,000 test kilometres driven on the “Circuit Calafat” in Spain. The Porsche Formula E team will compete in the ABB FIA Formula E Championship for the first time in Season 6 (2019/2020). Neel Jani was signed up as the first driver. The special features of the race series include specially designed street circuits at the heart of different cities, the omission of classic pit stops, and the opportunity for fans to award their favourite drivers with an extra boost of power, and therefore an advantage in crucial situations that decide the race, by voting online.