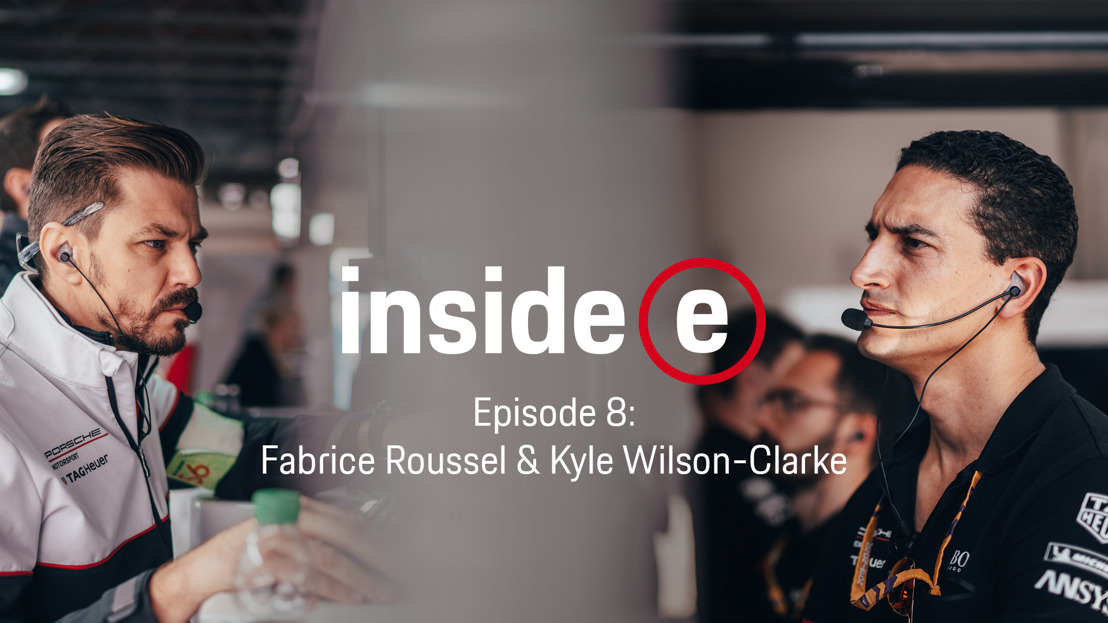 Monday, May 18, 2020 — As race engineers in the TAG Heuer Porsche Formula E Team, Kyle Wilson-Clarke and Fabrice Roussel have a direct line to the two works drivers Neel Jani and André Lotterer. In the eighth episode of the “Inside E” podcast, the duo talk about the tasks of race engineers, the special features of Formula E and their close collaboration with the drivers. Wilson-Clarke and Roussel also explain why the team concept is the crucial factor for success.

Wilson-Clarke first worked with Jani on the Porsche LMP1 project. “It was a fantastic time,” said the Brit, reminiscing about the successful years. After that he was intensively involved in the preparations for entering Formula E, and part of the Porsche Formula E project from its inception. Roussel has been part of a successful team with Lotterer for some time and brings a wealth of Formula E experience to the table. “The great thing about our job is that no two days are the same,” said the Frenchman.

Wilson-Clarke and Roussel have been involved in the world of motorsport for many years and agree on one thing, that Formula E demands top performance from man and machine. “The energy and power management at a one-day event is the biggest difference from other race series. It’s all about getting the maximum out of the car and driver at different ‘power levels’ – that is the art of Formula E engineering,” said Wilson-Clarke. As race engineers they have to deal with enormous time pressure. “It is important to stay calm and focussed, whatever the situation,” adds Roussel. On top of that is the intensive preparation in the simulator and the necessary thinking “outside the box”. “In Formula E, you have to be open to new ideas as an engineer. We have a whole load of new options compared with conventional motorsport and everything that we know from the last 15 years of racing,” said Roussel.

In terms of collaborating with the drivers, communication and trust are first and foremost. “Mutual understanding and dealing with stressful situations are incredibly important,” stated Wilson-Clarke. Race engineers and drivers make the perfect team. Behind them are other engineers, who provide Roussel and Wilson-Clarke with valuable information. “Teamwork is everything in motorsport. That’s how everyone gets the best out of themselves,” added the Frenchman.

No one in the TAG Heuer Porsche Formula E Team sits back after enjoying success. Although both Wilson-Clarke and Roussel enjoy looking back on the second place at the first race in Saudi Arabia and the pole position in Mexico, the pursuit of success and perfection is a constant companion. “As an engineer you are always looking at the result and what you could have done better,” said Roussel self-critically. “We want to develop and improve continuously,” said Wilson-Clarke. The long-term goal is clear for them both: winning the driver’s and team standings for Porsche.

The Porsche Formula E podcast is in English and can be accessed from the Porsche Newsroom. “Inside E” is also available on other platforms such as Apple Podcasts, Spotify and Google Podcasts.