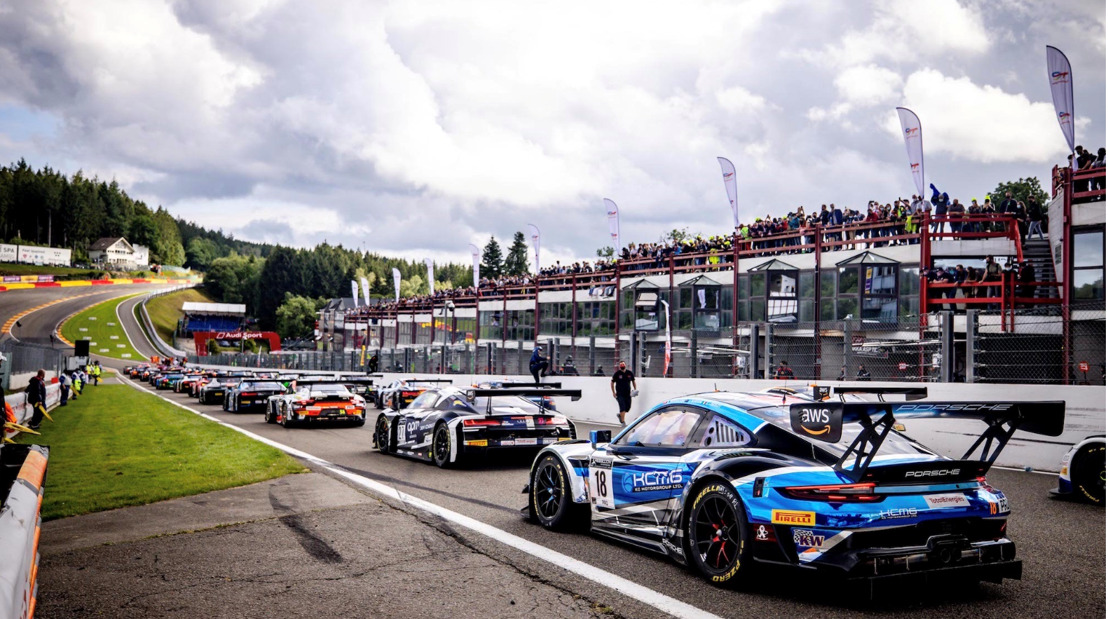 In the Pro-Am class, the team founder of EBM Giga Racing Will Bamber, his New Zealand compatriot Reid Harker, Carlos Rivas from Luxembourg and Wolfgang Triller finished in 20th place. The German had jumped in as a substitute driver shortly before the start. As a quartet, they came out on top in their class against Herberth Motorsport’s No. 911 Porsche crewed by Antares Au (Great Britain), Daniel Allemann (Switzerland) and the German brothers Alfred and Robert Renauer. The Am category was won by Pieder Decourtins from Switzerland with Marc Basseng, Dennis Busch and Manuel Lauck (all Germany) in the 911 GT3 R fielded by Haegeli by T2 Racing. In the Silver Cup, Allied Racing’s 500+PS customer racing car from Weissach achieved ninth with drivers Julien Apotheloz (Switzerland), Bastian Buus (Denmark), Lars Kern (Germany) and Arno Santamato (France).

Ten Porsche customer teams tackled the 24-hour marathon at the Circuit de Spa-Francorchamps with a total of twelve 911 GT3 R. The initial phase of the race was marked by a serious accident in the Raidillon corner. This signalled an early end for Rutronik Racing’s 911 shared by works drivers Kévin Estre (France) and Richard Lietz (Austria) as well as Sven Müller (Germany), and resulted in a caution phase that lasted a good 50 minutes. When the race went green again, a heavy rain shower caused chaos on the track. Multiple pit lane drive-through penalties for disregarding the track markings and another full course yellow at an unfortunate time saw the Porsche, which had been running in a promising position, drop out of the leading lap at around midnight.

Subsequently, the car campaigned by GPX Racing with drivers Earl Bamber (New Zealand) and works drivers Matt Campbell (Australia) and Mathieu Jaminet (France) had to retire with steering problems. Dinamic Motorsport withdrew both 911 GT3 R, after penalties and repairs threw them out of contention for promising positions. For the until then best-placed Porsche from Schnabl Engineering, the race was over just before dawn: at around 4 am, contact with another rival led to an accident, which threw Michael Christensen (Denmark), Dennis Olsen (Norway) and the French works driver Frédéric Makowiecki out of the competition.

Only the two KCMG Porsche managed to make it through the endurance classic relatively unscathed. As a result, they were among the frontrunners. In the final hour, a last heavy downpour allowed the No. 47 car to make up two places and move into fifth. However, even this crew suffered setbacks: Nick Tandy and Maxime Martin had to contest the last third of the race alone. Their teammate Laurens Vanthoor had to watch the race action from the sideline after an unfortunate collision in the paddock.

Comments on the race
Sebastian Golz (Project Manager Porsche 911 GT3 R): “That was a typical 24-hour race for Spa-Francorchamps. First a major accident, we had dry and wet track conditions and long caution phases. Ultimately, some of our Porsche 911 GT3 reached the finish line. Some had problems, others didn’t. Fifth place is a good result, congratulations to KCMG. Team Haegeli by T2 Racing won its Am class, congratulations to them, as well. Thank you to our customer teams. They demonstrated huge commitment this weekend. We’re now looking ahead and we’ll return to Spa next year stronger than ever – because we want to reclaim the 24-hour trophy.”

Maxime Martin (KCMG, Porsche 911 GT3 R #47): “All in all, a difficult race for us. I’m really pleased with fifth place. Our team had the two best-ranked Porsche. In view of the changeable conditions, the length of the race and the many competitors on the track, we had to remain completely focussed the whole time. In my last stint, I was driving on a partly wet track with slicks. Nick took the wheel and he was also taken by surprise by heavy rain on dry tyres. It was definitely a lot of fun, that’s for sure. But it’s not always easy getting the right feeling for the grip and keeping the car on the track. We were determined to finish. After Laurens Vanthoor’s bad luck, Nick and I had to drive alone. We wish him a speedy recovery and we’re pleased that nothing more serious happened to him in the collision. Now I’m happy that the race is over and our job is done.”

Alexandre Imperatori (KCMG, Porsche 911 GT3 R #18): “First and foremost, we can be happy that we reached the finish line – the race was without a doubt very difficult. Our team covered the full distance with both Porsche however, many other cars didn’t make it that far. On our side of the garage, we struggled a bit with the performance on the dry track. The balance wasn’t really right from the start. We don’t yet know why. In any case, we had to get past the problem and we opted for a conservative approach. Now we’re focussing on the positives. Congratulations to our racing squad on this great result.“

Will Bamber (EBM Giga Racing, Porsche 911 GT3 R #61): “We were determined to see the finish here and we succeeded. What’s more: although we started from the back of the grid, we ended up claiming 20th overall and are the best-placed Porsche in the Pro-Am Cup. The right strategy proved to be the decisive factor here. We narrowly missed out on the podium in our class, but this result is still a great success for us – especially given that we struggled with problems at the pre-test. Everyone in the team did a flawless job and the drivers delivered as well.”