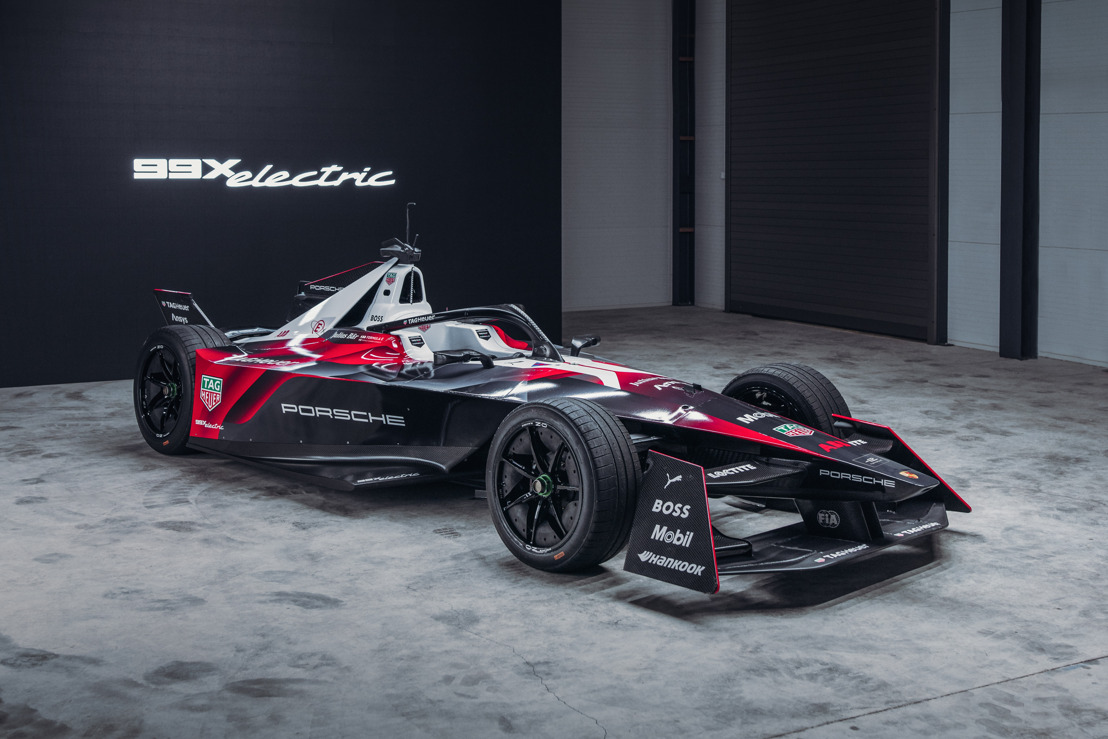 With the Porsche 99X Electric Gen3, Porsche heads into a new era of Formula E. The electric racing car, which underwent an evolution in the Porsche Development Centre in Weissach, ​ celebrated its world premiere in the Porsche Experience Center in Franciacorta, Italy. It will be fielded by the TAG Heuer Porsche Formula E Team in the ABB FIA Formula E World Championship from the 2023 season.

Stuttgart/Franciacorta. The Mexico City E-Prix on 14 January 2023 will be the first race for the Porsche 99X Electric Gen3. The arrival of the third vehicle generation at the start of next season heralds a new era for the world’s first electric racing series.

The new Gen3 cars such as the Porsche 99X Electric Gen3 are the fastest, lightest, most powerful and efficient electric racing cars ever built. They have been specifically designed for gripping wheel-to-wheel duels on tight city circuits in fascinating major cities of the world where Formula E traditionally contests its races.

The overall concept of the Porsche 99X Electric Gen3 and the other vehicles of the new Formula E generation constitute a major evolutionary step. The vehicles have shed weight and feature a shorter wheelbase and narrower track. While the battery has shrunk in size, it is more powerful. The proportion of recuperative energy has grown. The aerodynamics and design have also undergone modifications. All in all, the new vehicles are more agile, which also improves performance on the racetrack.

The striking new look of the Porsche 99X Electric Gen3 was inspired by the Porsche brand purpose “Driven by Dreams”. It signifies individuality, uniqueness and a future-oriented progressive zeitgeist that also appeals to a younger target group.

Comments on the world premiere of the Porsche 99X Electric Gen3

Thomas Laudenbach, Vice President Porsche Motorsport:“We’re delighted to be able to present the new Porsche 99X Electric Gen3 to the world. Our development team in Weissach have invested a great deal of work, experience, heart and soul into this race car. They can all be truly proud of the result. Like the all-new Formula E generation, the Porsche 99X Electric Gen3 represents a technological milestone in all-electric racing. For Formula E and also for Porsche, campaigning these new cars from season 9 of the ABB FIA Formula E World Championship is a significant step into the future of motorsport. We’re looking forward to the start of the season and a new era.”

Florian Modlinger, Director Factory Motorsport Formula E: “There’s a sense of excited anticipation as we head into the new ABB FIA Formula E World Championship season. Our team and our drivers António Félix da Costa and Pascal Wehrlein still have a lot of work to do ahead of the first race with our new Porsche 99X Electric Gen3 in Mexico on 14 January. However, we’re confident that we’ll make further progress before the start of the season and that we will be in a good position when the cards are reshuffled amongst the teams with the arrival of the new cars. The new Gen3 vehicles, including our Porsche 99X Electric Gen3, will hopefully make the races even more spectacular for fans and give the popularity of Formula E worldwide even more of a boost.”

António Félix da Costa, Porsche works driver: “Our new car is a big step forward. It’s lighter and more powerful than its predecessor – that alone brings a smile to a racing driver’s face. As a newcomer to the TAG Heuer Porsche Formula E Team, I’ve used the last few weeks to get to know the engineers and mechanics and to find my place in the squad. The team has made it very easy for me. I felt comfortable right from the get-go. I also get along well with my new teammate Pascal, whom I’ve raced against in various series. We have a common goal, namely to bring Porsche to the top. Porsche is a brand synonymous with victories. We want to deliver those as quickly as possible with the new Porsche 99X Electric Gen3.”

Pascal Wehrlein, Porsche works driver: “We’re experiencing exciting times as a team at the moment. During the tests with our new car, I had a good feeling right from the start. We gained a lot of insights and made great progress. At the very beginning, it was about getting the car running, but very quickly it became just as much about performance. And, of course, efficiency, which will also be a key to success with the new generation of cars. These were incredibly exciting experiences for me. We still have some time before the season starts. We’ll use that to become better acquainted with the Porsche 99X Electric Gen3 and put the puzzle pieces together so that we’re optimally prepared for the start of the season-opening race in Mexico.”

The intention behind campaigning the new Gen3 cars is to set new benchmarks in motorsport in terms of performance, efficiency and sustainability. That is the goal stated by the world automobile association FIA and Formula E. For its fourth season in Formula E, Porsche has developed the new Porsche 99X Electric Gen3, which, like other Gen3 cars, distinguishes itself from previous vehicles in many areas. The main differences:

​Powertrain: Developed in-house by Porsche Motorsport with a maximum drive power of 350 kW on the rear axle – 100 kW more than the predecessor generation (Gen2).

Brakes: The new front powertrain adds 250 kW to the 350 kW at the rear, resulting in energy recovery with an output of up to 600 kW – more than double the regenerative capability of the Gen2 vehicles. Additional fraction brake controlled by a brake-by-wire unit.

Efficiency: The electric motor achieves about 95 percent power efficiency compared to around 40 percent for an internal combustion engine. Over 40 percent of the energy used is recuperated via regenerative braking.

Charging capability: The new ultra-high-speed charging capacity of the Gen3 vehicles should add around 600kW of energy during the race. This means that the chargers of the new Formula E generation would be almost twice as powerful as the world’s most advanced commercial chargers. Moreover, the fast-charge technology should guarantee a consistently high battery performance.

Sustainability: According to the component manufacturer, the battery cells in the new Gen3 cars are made from sustainably sourced minerals. After every race season, the battery cells should be reused or recycled. For the construction of the carbon fibre bodywork, the manufacturer states that recycled carbon fibre is used from retired Gen2 vehicles. This should reduce the carbon footprint of production by more than ten percent. To determine measures that can help reduce environmental impact, the carbon footprint of new Formula E vehicles is measured from the very start of the design phase. All unavoidable emissions will be offset as part of Formula E’s net zero carbon commitment.

The TAG Heuer Porsche Formula E Team heads into its fourth season supported by 15 partners and is delighted to welcome two new on-car partners at the world premiere of the Porsche 99X Electric Gen3. Cato Networks, the provider of the world’s leading SASE cloud platform, and the Swiss wealth management group Julius Bär are represented on the Porsche 99X Electric Gen3 as official partners.Continuing its support of the team, the Swiss manufacturer of luxury watches, TAG Heuer, which has been the team’s title and timing partner right from the start, as well as the Swiss energy and automation technology group ABB and simulation software specialist ANSYS. Also completing the highly valued circle of nine on-car partners is: ExxonMobil with its Mobil brandas a technology partner, together with the global brand and technology enterprise Henkel with its brand LOCTITE, the fashion company Hugo Boss and the sports lifestyle company Puma.

With a one-two result thanks to Pascal Wehrlein and André Lotterer in the Porsche 99X Electric, the TAG Heuer Porsche Formula E Team celebrated its greatest success to date in Mexico on 12 February 2022. In 2023, the team contests its fourth season in the world’s first all-electric racing series with the new Porsche 99X Electric Gen3. As an accelerator for innovative and sustainable mobility technologies, Formula E has brought thrilling motorsport to people living in major cities since 2014. With the all-electric Taycan Turbo S, Porsche again supplies the official safety car in 2023, and thus underlines the importance of Formula E for Porsche Motorsport.