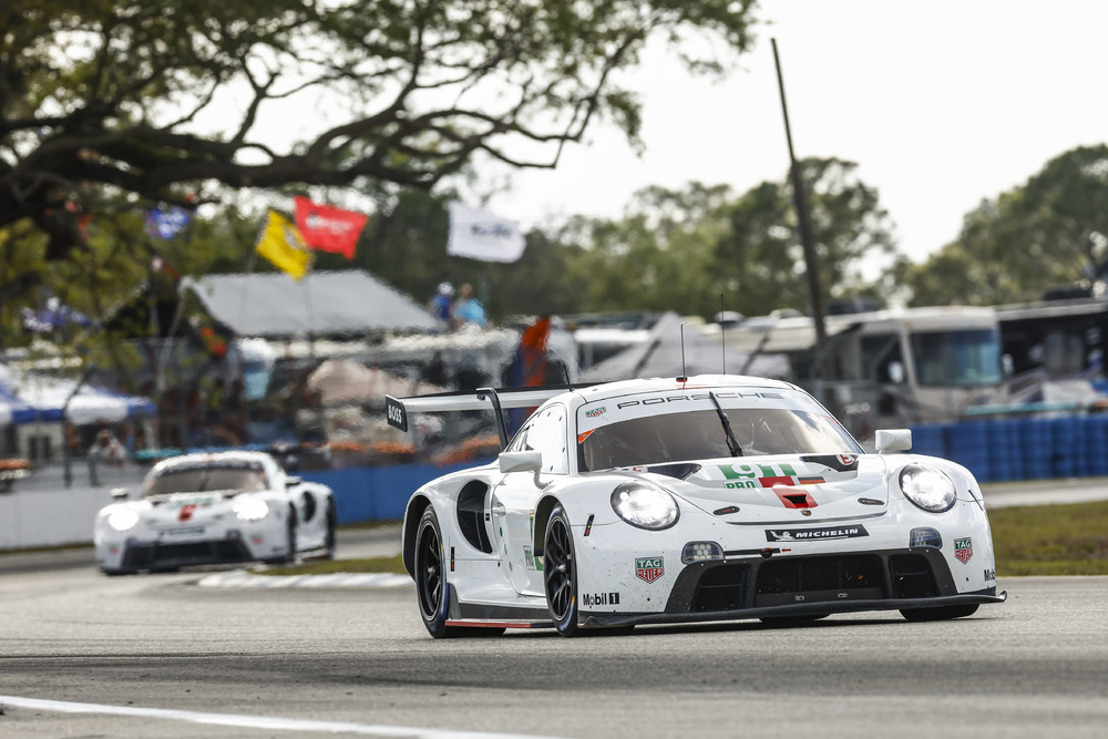 Stuttgart. Porsche heads to round two of the season leading the FIA World Endurance Championship WEC. After clinching a class win at the season opener in Sebring (USA), the factory squad now aims to follow up with another victory at the six-hour race at Spa-Francorchamps. The latest generation of the ca. 378 kW (515 PS)
​Porsche 911 RSR remains unbeaten on the Formula 1 racetrack in Belgium. In the 2019/2020 and 2021 seasons, the 911 dominated the GTE-Pro class on the Ardennes circuit. Porsche is eager to continue this streak this coming weekend.

“After our big win recently in Sebring, where we clinched first and third place, and last year’s victory at Spa, our goal is clear: We want to win there again. Our greatest desire this year is to secure the title with the 911 RSR. To do this, we have to earn maximum points this weekend,” declares Alexander Stehlig, Director Factory Motorsport FIA WEC. “We started the season well in Sebring, but there’s still room for improvement. Most notably, we want to keep working on our pit stops. If we manage this, and everything runs smoothly in the race, we should be able to bring home a one-two result. That would be the perfect rehearsal for the 24 Hours of Le Mans, which is coming up in June.”

The Circuit de Spa-Francorchamps lies in the far east of Belgium, not far from the German border. The racetrack, which opened in 1921, measures 7.004 kilometres – the longest permanent circuit on the FIA WEC calendar. Featuring 21 corners and several long straights, the storied racetrack rolls uphill and down dale through dense forest – hence its nickname the “Ardennes rollercoaster”. The fast passages like Raidillon/Eau Rouge and Blanchimont are as notorious as the famous La Source hairpin. For the 2022 season, the venue has undergone extensive renovations and expansions. While new gravel beds and grandstands have been installed at several corners, nothing has changed in terms of the length and layout of the circuit.

Richard Lietz from Austria and Italy’s Gianmaria Bruni join forces in the No. 91
​Porsche 911 RSR, with Kévin Estre and Michael Christensen sharing the sister car. In March, the race drivers from France and Denmark won the season-opening round in Sebring at the wheel of the No. 92 car and currently lead the championship. Porsche heads to round two of the season at the top of the manufacturers’ classification. ​

The accomplished German customer teams Project 1 and Dempsey-Proton Racing each field two Porsche 911 RSR racers at the second WEC round of the season. Matteo Cairoli from Italy competes for Project 1. At Dempsey-Proton, team owner Christian Ried joins forces in the No. 77 car with the two British racing drivers Harry Tincknell and Sebastian Priaulx. The No. 88 sister car is shared by Americans Fred Poordad and Patrick Lindsey with Belgium’s Jan Heylen. The British GR Racing outfit relies on the British drivers Michael Wainwright and Ben Barker as well as Riccardo Pera from Italy.

An overview of teams and drivers

Richard Lietz (Porsche 911 RSR #91): “After Spa-Francorchamps underwent modifications, there are more gravel traps there again. That makes me curious to see how this will affect the driving style. It looks good on the videos, but we’ll only get a real idea in free practice on Thursday. I hope that the characteristics of this legendary track haven’t changed. I expect fierce competition from all of the cars in our GTE-Pro class at our first European race of the season.”

Gianmaria Bruni (Porsche 911 RSR #91): “Spa has been a regular fixture on the calendar since the FIA WEC was founded – for me, it’s an absolute highlight of the season. The track is a lot of fun, especially in the Porsche 911 RSR. We want to harvest maximum points. A lot of the course has been redesigned. I’m excited to see what impressions we’ll get during the shakedown on Thursday. Let’s see if the newly paved sections make a big difference. In recent years we’ve had it all at Spa: sunshine, rain and even snow. The weather in the Ardennes always has a few surprises in store.”

Kévin Estre (Porsche 911 RSR #92): “In many places where there used to be asphalt run-off zones, there are now new gravel beds. Let’s see if we have to take a different line through the famous Eau Rouge. All in all, I’m really looking forward to the upcoming race weekend. The track is unique and challenging, and the grandstands are finally open for the many fans. That creates a great atmosphere. Last year we enjoyed a perfect weekend at Spa: pole position and class win. The Porsche 911 RSR drove beautifully in both qualifying and the race. There’s no reason this year should be any different. But we have to keep our wits about us: the competition will be tough.”

Michael Christensen (Porsche 911 RSR #92): “We’ve always done well at Spa-Francorchamps. I hope that’ll be the case next weekend, too. Another victory is the clear goal. If we can do that, we’ll not only be in a great position in the championship but it also gives us additional motivation ahead of the Le Mans highlight. With this in mind, the upcoming race in Belgium is critical for us. I can hardly wait to get back on the track there.”