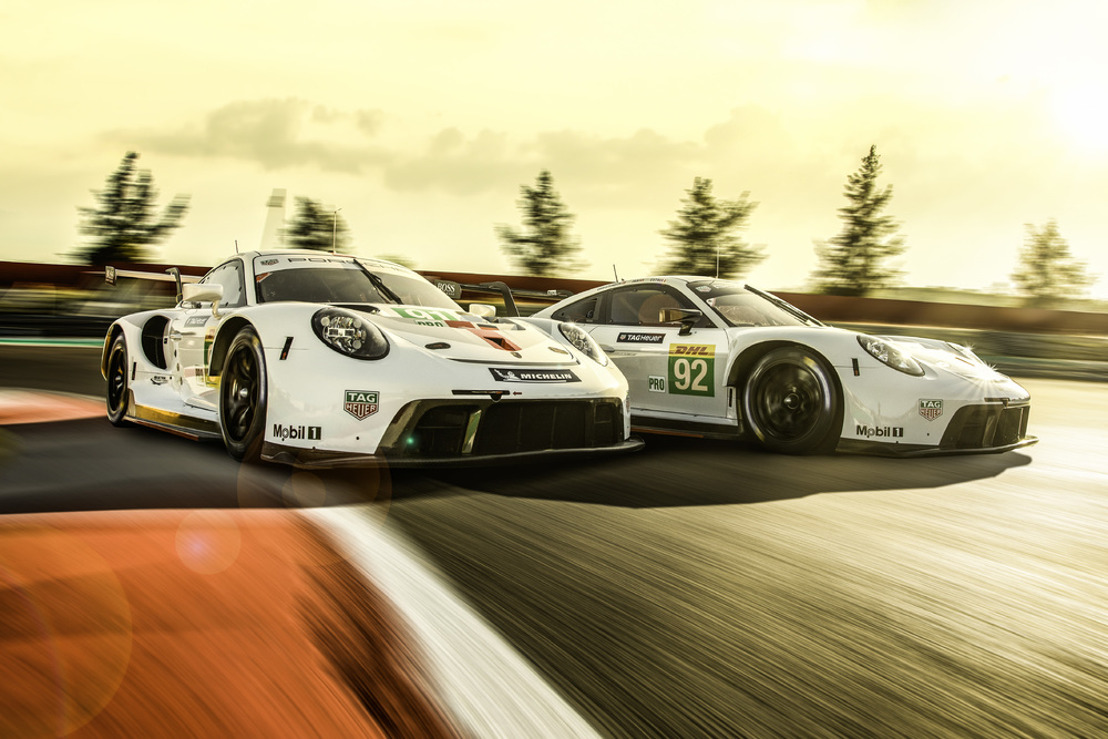 “We’re heading into a very special season: It’s our last year with the factory-run 911 RSR in the GTE-Pro class. We’ve notched up many victories since 2013 and we want to conclude the story in 2022 with a happy ending,” says Alexander Stehlig, Director Factory Motorsport FIA WEC. “In preparation for the new season, we travelled to Barcelona for a few days in February to do some testing. Our main priority there was on the new racing tyres from our partner Michelin. We gained some important insights and we head to the season-opener in Florida feeling very confident. The Prologue in Sebring should wrap up our preparations for an exciting year.”

“Last season, we had a firm grasp on the World Championship trophy right up until the very last race – only to have a contentious situation snatch it from our hands with 15 laps to go. The team hasn’t forgotten this,” explains Stehlig, and states the clear goal for 2022: “We couldn’t be more motivated. We want the World Championship title and to win our class at Le Mans!”

The race
Over the eight-hour race, the fastest vehicles will cover a distance of around 1,000 miles (1,609 kilometres). This throws major challenges at the teams, the drivers and their cars. About a third of the 6.02-kilometre circuit in the heart of the Florida “sunshine state” consists of concrete slabs, which up until the 1940s were part of the runway at the former Hendricks Army Airfield. Due to the hefty vibrations, the racetrack is often mentioned on social media with the hashtag #RespectTheBumps. The fast and demanding circuit features 17 turns including the 180-degree right-hander dubbed “The Sunset Bend” – a popular spot for spectacular photos every year.

Sebring has hosted the World Endurance Championship twice so far. In 2012, works drivers Marc Lieb (Germany), Richard Lietz (Austria) and Patrick Pilet (France) finished second. In the 2018/2019 season, Lietz and his Italian teammate Gianmaria Bruni won the GTE-Pro class with the Porsche 911 RSR. Porsche is by far the most successful manufacturer in the long history of endurance racing at Sebring, with the Stuttgart marque notching up a total of 18 overall wins. The most recent outright victory was achieved in 2008 by Timo Bernhard (Germany) with Frenchmen Romain Dumas and Emmanuel Collard in the Porsche RS Spyder.

“Sebring is a mega event which we tackle alongside the IMSA series and the Porsche Carrera Cup North America,” says Alexander Stehlig with a smile. “It’ll be non-stop action out on the track. We’re expecting a big party just like we experienced in 2019!”

While the endurance classic of the North American IMSA WeatherTech SportsCar Championship is contested over twelve hours, the WEC runs over a distance of 1,000 miles. Given the eight-hour race duration, the distribution of points for the season-opening round is multiplied by the factor of 1.5 based on the conventional points system 25-18-15-12-10-8-6-4-2-1. The result will be rounded up to 38-27-23-18-15-12-9-6-3-2. An additional point is awarded for achieving pole position. Another special feature: During the pit stops at Sebring, in typical US-racing-style, the mechanics must jump over the wall that separates the paddock and pit lane gantry from the racetrack. At all other WEC rounds, the teams work out of pit garages.

The Porsche GT Team drivers
For the 2022 season, the cockpit of the No. 91 Porsche remains unchanged with Austria’s Richard Lietz and Gianmaria Bruni from Italy again sharing driving duties. Britain’s John McGregor continues as their race engineer. The sister car is helmed by Frenchman Kévin Estre and Michael Christensen. The Dane, who is the 2018/2019 world champion and Le Mans class winner, returns to the Porsche’s FIA WEC factory squad after a year’s break. As the race engineer, Adam Hardy from Great Britain is responsible for the performance and tactical side of the No. 92 Porsche 911 RSR.

The customer teams
The accomplished German customer teams Project 1 and Dempsey-Proton Racing each field two Porsche 911 RSR racers in the 2022 WEC season. Matteo Cairoli from Italy competes for Project 1. At Dempsey-Proton, team owner Christian Ried joins forces in the No. 77 car with the two British racing drivers Harry Tincknell and Sebastian Priaulx. The No. 88 sister car is shared by Americans Fred Poordad and Patrick Lindsey with Frenchman Julien Andlauer. The British GR Racing outfit will start the season at round two in Spa-Francorchamps.

The Penske team, which will take over the racing commitments with Porsche in the FIA WEC and IMSA series from 2023 with the new LMDh prototype, contests the LMP2 class this season. The driver crew in the No. 5 Oreca-Gibson consists of the two new Porsche works drivers Dane Cameron from the USA and Felipe Nasr from Brazil with the experienced French racing pro Emmanuel Collard. Taking on the FIA WEC competition serves as preparation to compete in the Hypercar/GTP class from next year.

Drivers’ comments before the race
Richard Lietz (Porsche 911 RSR #91): “The WEC is booming – this year there’s a huge grid line-up with almost 40 cars. That’s nice and at the same time challenging because the traffic in a race with four different categories is heavier. We’re very familiar with the Sebring track and have been extremely successful there. We’re tackling the race in the number 91 car with the same crew, the same team and a car that we know very well.”

Gianmaria Bruni (Porsche 911 RSR #91): “Finally we’re back driving in the USA. I love the Sebring races and can hardly wait. Our Porsche 911 RSR is fully developed, and the team works impeccably. All of the ingredients for the next possible success after 2019 are there. The only goal can be a class victory – there’s no question about it.”

Kévin Estre (Porsche 911 RSR #92): “In 2021 we missed out on winning the title in the very bitter final metres of the race. That was difficult to stomach and will certainly give us additional motivation for the upcoming season. We have unfinished business – and we want to settle the score. I’m driving with Michael again this year, which I’m really looking forward to. This will be the last season with our factory team’s 911 RSR. We have very clear goals: winning the world championship and class victory at the 24 Hours of Le Mans. We want to build a solid basis for a very successful season starting now at Sebring.”

Michael Christensen (Porsche 911 RSR #92): “I’m really pleased to be able to drive the full 2022 season in the works team’s Porsche 911 RSR again. The year kicks off with the great race at Sebring. The track in Florida has a rich history and some unique characteristics. The track surface is very old and partially made of concrete slabs. The hard bumps put enormous stress on the car and us drivers. Sebring is not only physically taxing but also mentally very demanding.”

Dane Cameron (Team Penske #5): “After many years in the North American IMSA series, our involvement in the FIA WEC throws completely new challenges at me. It’s no secret that this campaign serves as preparation for the upcoming races with Porsche Penske Motorsport starting in 2023. Our team would like to get to know the ins and outs of the World Endurance Championship at an early stage. For me personally, a dream will come true this year: I’ve often tried to get a seat at Le Mans. It never happened. Now I finally get to contest this legendary race.”

Felipe Nasr (Team Penske #5): “It’ll be a year of preparation for Penske and us, but by no means one without sporting demands – we want to win. At the same time, there’s a lot to learn: the racetracks, the special WEC rules and the dynamics in the races. All of this differs from the IMSA series. However, as soon as we get out on the track, there’s just one goal for Dane, Emmanuel, me and the team: to win our class. I’m really looking forward to my first WEC season.”