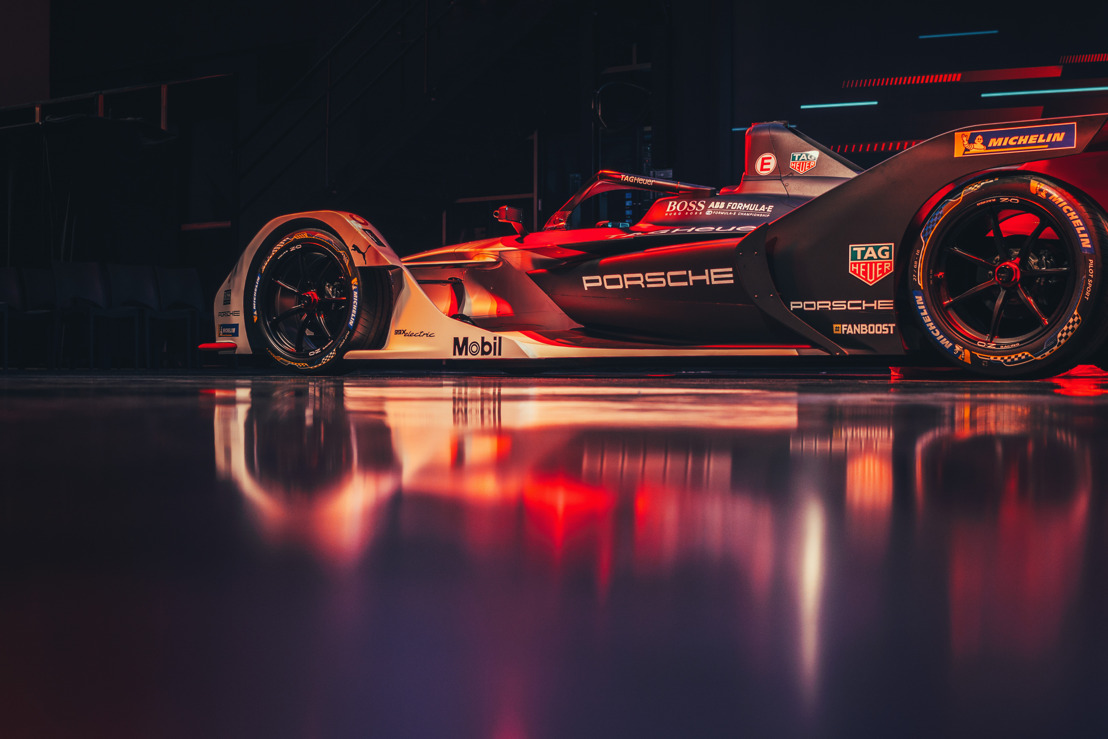 Wednesday, August 28, 2019 — With the international premiere of the Porsche 99X Electric, Porsche has reached another milestone on the way to the works entry in the 2019/2020 season of the ABB FIA Formula E Championship. The digital community was actively involved in the unveiling of the car as part of the live video game ‘Formula E Unlocked’ on twitch.tv/Porsche.

Porsche regular drivers Neel Jani and André Lotterer played an active role in the car presentation with players from around the world. They were guided through the Porsche Digital GmbH premises in Ludwigsburg by specific instructions from the gaming community, first to find the Porsche 99X Electric and then to unveil it.

“It was a unique car presentation unlike anything the motorsport world has ever experienced before. It was great fun joining the gamers’ search for the Porsche 99X Electric both virtually and in real life at the same time. It is great that Porsche is breaking new ground and involving the young, digital generation,” says Jani. “A different kind of car premiere; I really enjoyed the fact that Neel and I acted as live players. It is fantastic that we are communicating with the digital target audience as equals and that they were able to be part of it,” says Lotterer.

Highlights of the ‘Formula E Unlocked’ video game will be available at newstv.porsche.com as of 29th August.

The TAG Heuer Porsche Formula E Team welcomes another member from the Porsche family. Pascal Zurlinden, Director GT Factory Motorsport since 2018, will take on a key role in Formula E in addition to his role in GT works racing as Director Factory Motorsport. The Frenchman has been working for Porsche at the Weissach development centre since 2014, initially on the LMP1 project, and in the GT sector since 2017.

“I’m looking forward to also being part of the TAG Heuer Porsche Formula E Team from now on and supporting my colleagues with my experience. The Formula E concept is very interesting and is different from traditional motorsport series, a new and exciting task that I am really looking forward to. Of course, it is also great to see so many familiar faces from my time in LMP1 and to be working with the team again,” says Pascal Zurlinden.

Keeping the Porsche 99X Electric in the family

“Today sees the Porsche 99X Electric join the list of historic Porsche motorsport cars,” says Pascal Zurlinden, Director Factory Motorsport. “The naming and the design give the car its initial character and bring it to life. It is a special day for everyone who has put a lot of work into the Porsche Formula E project in recent months.”

In terms of the design, the traditional Porsche motorsport colours were chosen for the Formula E racing car. From a bird’s-eye perspective, the Porsche emblem is clearly visible around the Halo system. As usual, the naming format is three digits which represent Porsche racing cars and two-door sports cars. The highest number, nine, was used twice, to re-emphasise the importance of the Formula E project for Porsche, while the X stands for the forward-looking approach and prototype racing. The Porsche 99X Electric also serves as a development platform for future fully electric production models.

The development of the Porsche powertrain, the ‘Porsche E-Performance Powertrain’, has played a central role from the start. The Formula E regulations stipulate a standardised chassis and a standard battery, while the drive technologies are developed by the manufacturers. The engineers were able to make use of their LMP1 experience when developing the Porsche Formula E powertrain. With the hybrid technology, the foundations were laid for electric mobility.

“In hindsight, we laid the foundations for Porsche’s future involvement in Formula E during the LMP1 project. We used the insights gained during that time in the development of the Porsche Formula E powertrain. We focussed on building a highly effective powertrain with the highest level of efficiency,” says Malte Huneke, Technical Project Leader Formula E. The 800-volt technology used in Formula E is also used in the series production of the fully electric Porsche sports car, the Taycan. In addition, energy management and efficiency are the keys to success in both Formula E and series production. This is where the permanent synchronous motor comes into play which has an important role in optimising the drive concept.

“In recent months, we have been able to sound out the reliability of the Porsche Formula E powertrain on the racetrack and on the test bench. We are very pleased and are optimistic going into the final preparations for the first race,” says Huneke. “In the coming weeks, we will focus on the performance of the Porsche 99X Electric. This is the next step on the road to the Porsche works entry in Formula E,” says Amiel Lindesay, who is from now on Head of Operations Formula E. The TAG Heuer Porsche Formula E Team will make its first official appearance in mid-October 2019 at the Formula E test at Valencia (Spain). “Both Porsche 99X Electric will take to the racetrack there for the first time, with Neel Jani and André Lotterer in the cockpit. From an operational perspective, it will be an exciting assignment for everyone involved. A good test before we contest our first Formula E race in November,” says Lindesay.

TAG Heuer, the Swiss manufacturer of luxury watches, is the Title and Timing Partner of the Porsche Formula E Team, which will contest Season 6 of the ABB FIA Formula E Championship under the name ‘TAG Heuer Porsche Formula E Team’. Porsche and TAG Heuer look back on successful collaboration in motorsport. With the partnership, both corporations are breaking new ground in the world’s first electric race series.

“TAG Heuer has been firmly established in motorsport for many years and has already celebrated many successes with Porsche. We are really looking forward to welcoming TAG Heuer as our partner once again. In the ABB FIA Formula E Championship, we will now build on previous successes in a highly innovative environment and write the next chapter in motorsport history,” says Carlo Wiggers, Director Team Management & Business Relations Porsche Motorsport.

The TAG Heuer Porsche Formula E Team will contest its first season in the 2019/2020 ABB FIA Formula E Championship with a total of 12 partners. “We are very proud of having many long-standing partners now on board the Formula E project. They are special partnerships that have grown over the years which is why we are even more delighted that many of them are joining us in Formula E. And we welcome our new partners. We are really looking forward to our future collaboration,” emphasises Wiggers.

By entering Formula E, Porsche is also breaking new ground from a commercial perspective. This environment addresses a young, different-minded and digitally-oriented target audience. “This sphere allows us to explore what customers expect from vehicles and mobility in general both now and in the future, also in terms of innovative products and services,” says Wiggers.

Alongside TAG Heuer, simulation software specialists ANSYS is a new corporation active internationally joining Formula E as official Technology Partner. Vodafone is also on board as Communication Partner, which sees it expand its partnership with Porsche. ExxonMobil is providing support with its Mobil brand as Technology Partner with newly developed fluids for electric drive and is closely involved in the development of the Porsche 99X Electric. The renowned fashion house from Metzingen, Hugo Boss, as global clothing partner of Porsche Motorsport, will kit out the TAG Heuer Porsche Formula E Team and bring the partnership to a new level both on the racetrack and in the workshop.

Lighting manufacturer TRILUX is also continuing its partnership – as official Lighting Partner of the team – and, alongside the brewery C. & A. VELTINS, will also be involved in Formula E as a long-standing partner. As Technical Partner of the team for fire-resistant racing gear and for shoes and luggage, Porsche will be kitted out by Puma, the globally active sport-lifestyle corporation from Herzogenaurach, with relevant products.

After more than 30 years, Porsche returns to single-seater racing. Entering Formula E and the accompanying restructuring of the motorsport involvement can be derived from the 2025 Porsche strategy. In addition to traditional GT road-going sports cars, fully electric sports cars are also firmly anchored in the strategy. Both should be reflected in the Porsche world of motorsport in the future. A large part of the corporation’s ‘Mission E’ is also the presence and success in motorsport with race cars with electric drive. In terms of hybrid technology and thus e-drive technology, racing and production have been enriching each other at Porsche for around a decade: the first hybrid race car, the 911 GT3 R Hybrid of 2010, went into the development of the 918 Spyder. In part, the 918 was the basis for the 919 Hybrid, which in turn influenced the development of the Porsche Formula E powertrain and the Porsche Taycan.