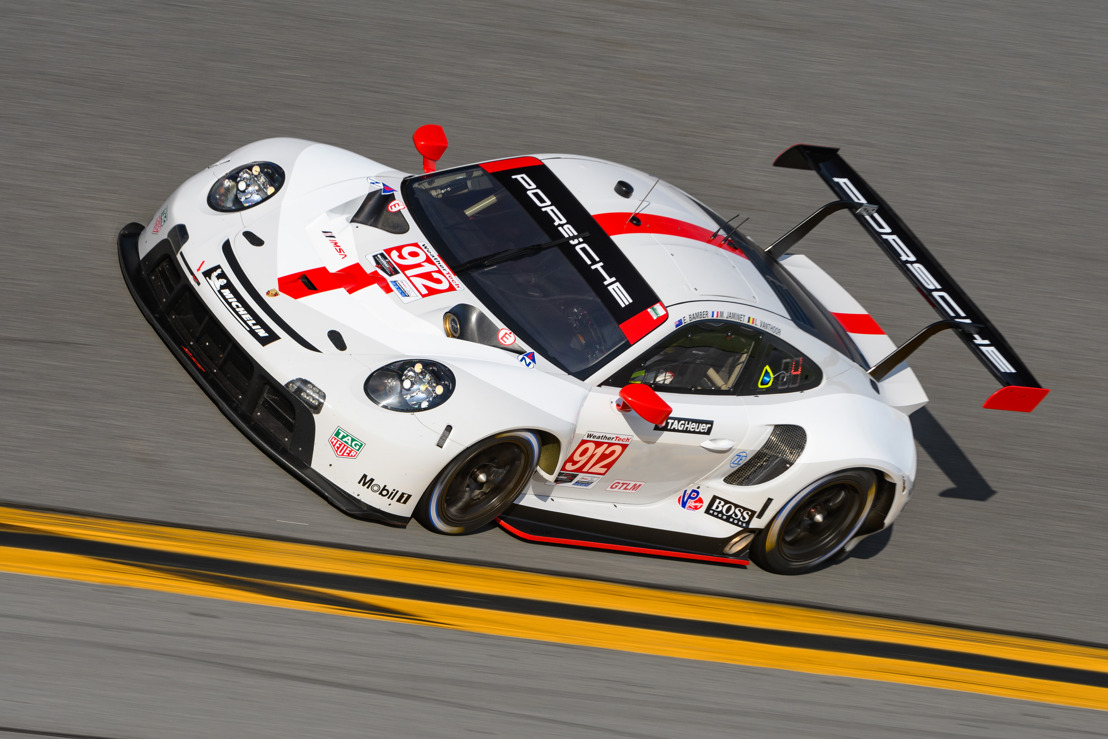 Thursday, July 2, 2020 — After a five-month hiatus, the IMSA WeatherTech SportsCar Championship revs up again on 4th July. After the postponement of races due to the coronavirus pandemic, the 2020 season gets underway again with another race at Daytona (USA). At the season-opening round at the Florida venue, Porsche fielded a pair of new 911 RSR at its North America debut and secured two podium spots. While the first race of the season traditionally runs over 24 hours, the second race takes just two hours and 40 minutes. In addition to the two factory cars in the GTLM class, the Wright Motorsports customer squad will field a Porsche 911 GT3 R in the GTD category.

For round two of the 2020 season, the International Motor Sports Association (IMSA) management has put together comprehensive measures to protect the health of all involved. The number of personnel per car is limited to 15, strict paddock rules apply, wearing a face mask outside the cockpit is mandatory at all times and regular temperature checks are required over the race weekend. The event, dubbed “240 at Daytona”, is shorter than previous rounds, and is over just two days. Free practice is held on Friday (3 July), with staggered practices, the qualifying and race held on Saturday. The Porsche GT Team faces a major challenge in finding an optimal setup for the two 911 RSR within a short timeframe and with reduced personnel. Opened in 1959, the Daytona International Raceway in Florida differs from other circuits, most notably by its banked turns: The angle of the banking in the oval passage of the 5.73-kilometre racetrack is 31 degrees. This requires a special vehicle setup.

Works drivers Earl Bamber (New Zealand) and Laurens Vanthoor (Belgium) share driving duties in the No. 912 Porsche 911 RSR. At the opening round of the season at Daytona, the reigning GTLM-class champions secured second place with Frenchman Mathieu Jaminet. Briton Nick Tandy and Frédéric Makowiecki from France share the cockpit of the No. 911 sister car. Supported by Matt Campbell (Australia) at the 24-hour race in late January, they finished on third place. Porsche currently ranks second overall. In order to step closer to defending the title, the successful factory squad has now set its sights on claiming the first victory of the season.

The seasoned customer team Wright Motorsports fields a 500+hp Porsche 911 GT3 R in the GTD class. At the wheel of the No. 16 vehicle, the American works driver Patrick Long joins forces with his compatriot Ryan Hardwick. At the season-opening round, the squad from the U.S. state of Ohio yielded fourth place in the GTD category.

Live streaming of the race

Round two of the IMSA WeatherTech SportsCar Championship season at Daytona takes off on Saturday, 4 July, at 6:10 p.m. local time (5 July, 12:10 a.m. CEST). The race over 2:40 hours can be viewed outside the USA and Canada on www.imsa.com.

The new Porsche 911 RSR (2019 model year) celebrated its debut in the IMSA SportsCar Championship at the 24 Hours of Daytona. The vehicle from Weissach, which produces around 515 hp depending on the air restrictor, is based on the high-performance 911 GT3 RS* road-going sports car. Compared to its extremely successful predecessor model, the car received improvements, most notably to areas such as driveability, efficiency, ergonomics and serviceability. About 95 percent of all components are new. The 911 RSR is powered by a 4.2-litre, six-cylinder boxer engine.

This is the IMSA SportsCar Championship

The IMSA SportsCar Championship was founded in the USA and Canada in 2013 after the merger of the American Le Mans Series and the Grand-Am Series. A year later the new sports car race series, which is organised by the International Motor Sports Association (IMSA), was contested for the first time. Sports prototypes and sports cars start in four different classes: GTLM (GT Le Mans), GTD (GT Daytona), Dpi (Daytona Prototype international) and LMP2 (Le Mans Prototype 2). The new Porsche 911 RSR is fielded in the GTLM class, and the Porsche 911 GT3 R contests the GTD class. The Porsche GT Team tackles the 2020 season in North America as the title defenders in the manufacturers’, drivers’ and team classifications.

Comments prior to the race

Pascal Zurlinden (Director Factory Motorsport): “First of all, I’d like to thank the IMSA management for making it possible to resume racing at the beginning of July. Huge collaboration with local authorities as well as manufacturers and teams was needed to get the green light for these upcoming events. We fully support the protocols to protect the health of everyone involved. We’re tackling the next races with the clear goal to defend our GTLM titles this season. With this in mind, we’re hoping that, when we return to Florida after our successful start at Daytona in January, we’ll bring home our first victory in the USA with the new 911 RSR.”

Steffen Höllwarth (Head of Operations IMSA Championship): “The excitement of returning to Daytona is huge. At the first outing with the two new Porsche 911 RSR we achieved two podium results. Now we aim to build on this. Although we’re returning to the same venue, the conditions will be completely different compared to January. The race is a sprint. We have to be prepared for very high temperatures in Florida in July, but short and heavy downpours can also happen at this time of the year. The reduced number of personnel and the shortened race weekend to two days play a major role. We have to prepare ourselves as best we can by the start of the first practice session. That means, we have to do our homework meticulously in the days leading up to the event.”

Nick Tandy (Porsche 911 RSR #911): “It’s great to contest a second race at Daytona – although it feels strange travelling all that way for a sprint over two hours and 40 minutes. At Daytona, we’re used to competing twice around the clock. I think that this shorter race will have a very different nature. No one will be overly risk-averse, no one will wait and hope for one last caution phase. It’s flat-out from start to finish. For me personally, the best thing is that we’re able to return to real competition at all. It’s a hugely important step that I’ve been looking forward to for weeks.”

Frédéric Makowiecki (Porsche 911 RSR #911): “The long wait is finally over and we’re back competing again – with real cars on real racetracks. We’re returning to Daytona feeling positive. After the double podium result for Porsche at the 24-hour race in January, there can be only one goal: class victory. Our package is definitely very good. After the long break due to the coronavirus pandemic, we’re heading to our next mission at Daytona feeling highly motivated and ready for an all-out attack.”

Earl Bamber (Porsche 911 RSR #912): “The anticipation for the next race is massive. I’d like to take this opportunity to thank IMSA, Porsche and all the other manufacturers. It has taken good and consistent collaboration to make it possible for us to go racing again. We head back to Daytona, but we’ll face very different conditions compared to the start of the season in January. The weather will certainly be different. What’s more, the race over less than three hours is totally different to one over 24 hours. It’s going to be a sprint race the likes of which we’ve never experienced at Daytona.”

Laurens Vanthoor (Porsche 911 RSR #912): “We’re all very excited – not only for the next outing in the 911 RSR but also for the special procedures in the upcoming races. The character of the event will differ from all previous races. There’ll be very few spectators at the track. Each team has only a limited number of people working at the racetrack. And there is significantly less track-time to find a suitable setup for the car. There are a lot of question marks, but one thing is certain: the incredible joy of finally returning to racing in the USA and continuing our title defence mission.”