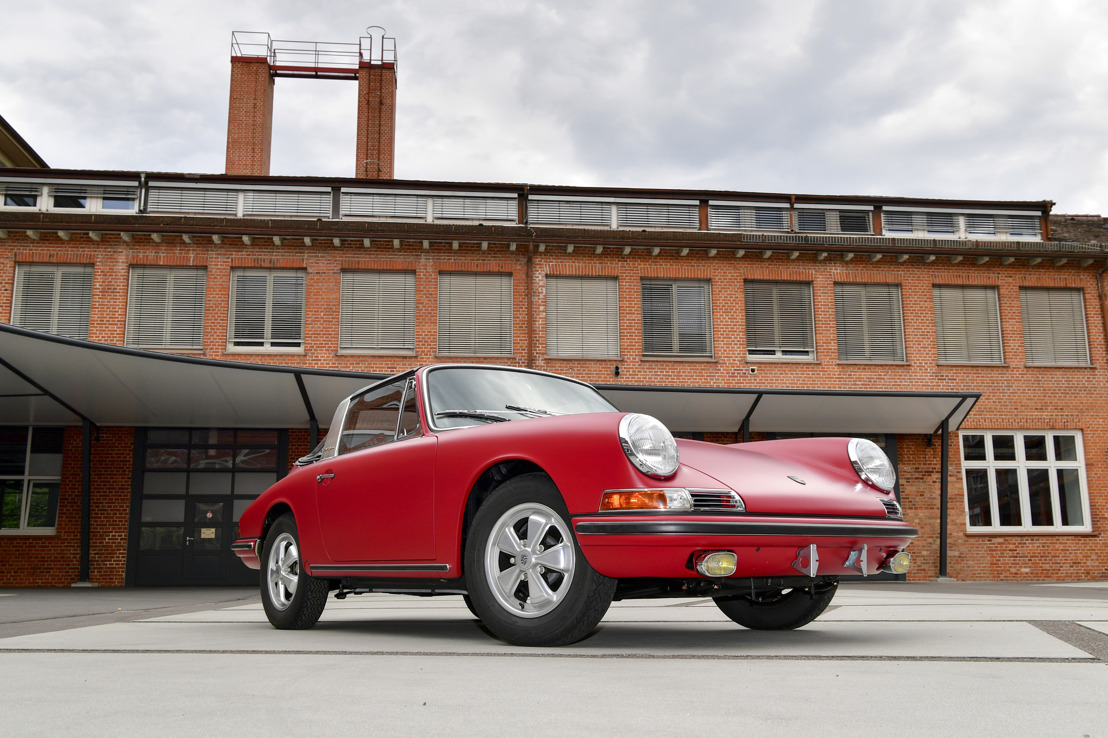 Wednesday, December 9, 2020 — From a spectacular barn find to a collector’s item with patina that is as good as new: the first Porsche 911 S Targa delivered in Germany is back on the road again after comprehensive factory restoration that took more than three years. Its owner, a long-time collector and Porsche enthusiast, discovered the car in the USA. “The Targa stood there for almost 40 years in a doorless garage, covered by a plastic tarpaulin. The owner at the time had seemingly just forgotten about the car,” says Uwe Makrutzki, Head of Porsche Classic Factory Restoration at Porsche AG. “The 911 S Targa was delivered to the Porsche dealer Hülpert in Dortmund on 24 January 1967. The restoration is a special project for us – after all, one of the first 911 Targa models has found its way back to Zuffenhausen.”

As a soft-window version, this early Targa has a soft rear window instead of the glass window that was available from 1967. Only 925 units with S engine, short wheelbase and soft window were produced by Porsche between the end of 1966 and 1968. The rare sports car was in a wretched state. After serving as a demonstration car for the Porsche dealer, it was sold to a customer in the USA in 1969. The open-top 911 was then parked in the above-mentioned garage in Long Beach (New York State) from 1977 to the end of 2016. On the positive side, it was complete – which was particularly pleasing in view of its many optional extras such as Webasto auxiliary heater, tinted windscreen, Blaupunkt Köln radio, leather seats, halogen fog lamps and outside thermometer.

The philosophy of the Porsche Classic Factory Restoration department is to restore the vehicles so that they as true to the original as possible. The search for authentic small parts such as cable clamps, rubber grommets and sealing plugs for the 2.0-litre S engine proved to be difficult. “Replica parts from third-party suppliers are out of the question for us. Luckily we can reach into our ‘treasure chest’ in such cases,” says Makrutzki. Porsche Classic does not just have access to the central warehouse with currently more than 60,000 different genuine spare parts: the in-house specialists also have at their disposal the original straightening sets, frame gauges, data sheets and technical drawings.

The second great challenge was the outer skin of the Targa roof. “Today’s material has a different grain and is more robust than the original. But our customer did not like it. For this reason, we had a visually identical cover produced especially for this project. In spite of their decades of experience, our experts still had to work gradually towards achieving the right finish, that is to say its bonding and stitching,” explains Makrutzki. This has the advantage that a suitable, contemporary Targa roof cover is now already in stock for the next 911 Targa soft-window model.

The client also had a special wish for the coating used for the chassis parts, engine panels and air cleaner system: instead of the especially robust powder coating normally used today, he decided in favour of true originality and therefore chose application of a two-component paint in black – corresponding to the delivery condition in 1967.

After around 1,000 hours of work on the body, the 911 Targa was painted by hand in the same colour that it had before its delivery over 50 years ago – in Polo Red. Because the owner does not just want to collect the sports car but also drive it, he decided on application of a painted-on paint protection film with a slight matting effect. This technology does without adhesive and can therefore be removed without any residue even after many years.

It took a total of more than three years until the first 911 S Targa delivered in Germany was finally restored to a like-new condition with the manufacturer’s know-how – including the charming patina. The next project of the Targa owner and passionate Porsche collector is already standing in the Porsche Classic workshop and waiting for its restoration – a very early 928.

About the Porsche 911 Targa

At the IAA in 1965, Porsche presented the 911 Targa as the first “safety cabriolet” in the world, featuring a roll-over bar with a width of a good 20 centimetres, a removable roof and rear mini soft top with plastic window. In this way, Porsche responded in a typically pragmatic way to a discussion in the USA that branded cabriolets as dangerous. This was followed shortly afterwards by a panorama rear window with heatable glass. The name of the open-top variant – “Targa” – was derived from the Targa Florio endurance race on Sicily that Porsche had already won four times. The additional cost compared with the Coupé was DM 1,400.

The now restored 911 S Targa had the following catalogue specifications:

Manufactured by Porsche, restored by Porsche: Porsche Classic awards this unique seal of quality up to eight times a year. It does so when a classic sports car that has been factory-restored from scratch leaves the workshop. In addition, around 70 other vehicles pass through the hands of the craftsmen every year for partial restoration of components such as the engine or gearbox. Around 30 specialists maintain, repair and restore customer vehicles here, from the 356 through to the Carrera GT. All the craft trades of a factory are represented here on an area of 1,500 square metres: body construction including paint shop, engine and gearbox assembly and a saddlery.

A cost estimate takes place at the start of every complete restoration. On the basis of photos, the specialists calculate the rough scope of the restoration work and the probable cost. If this is in line with the customer’s expectations, the sports car is inspected in the Porsche Classic workshop and a detailed cost analysis produced.

The experts dismantle the vehicle for a full restoration. The engine and gearbox are completely disassembled, cleaned and inspected. Worn or defective parts are replaced or, if possible, also repaired and restored if this is wished by the customer. After setup according to the original factory specifications, the drive system must initially prove its performance capability during testing on the test rig.

The experts proceed in a similar way with the bodyshell. After general removal of any corrosion, all the body cavities are opened – this is necessary preparation for a successful paint removal bath. After this, the body builders repair or replace all the metal that has aged. The older the vehicle, the more extensive the adaptation work that is necessary, even when genuine new parts from the in-house store are used. This is because there was already plenty of hand craftsmanship in the cars when the early models left the factory. The final trial assembly of the complete body takes place with untreated components in order to check and adjust gap dimensions and functions. This ensures that the doors and lids close exactly.

After this preparation, the body passes through the same cathodic dip coating line in the factory paint shop as the current new vehicles from Zuffenhausen – something that no other car manufacturer in the world offers. Cathodic dip coating guarantees complete, highly resistant priming right into the last fold. When this preparation has taken place, the complete paintwork is built up by hand in the original vehicle colour. Test painting of a panel ensures that the colour mixture is correct.

Application of each paint layer is followed by an extended drying period lasting three weeks. The last step in a full restoration is work on the interior. After this, the completely refurbished classic car must prove its qualities during extensive test drives.

The customer receives detailed documentation of all work performed in the Porsche Classic workshop in book form with comprehensive picture material. This also includes an engraved badge which confirms the original factory restoration by Porsche Classic and the second date of birth together with the chassis number and signature.