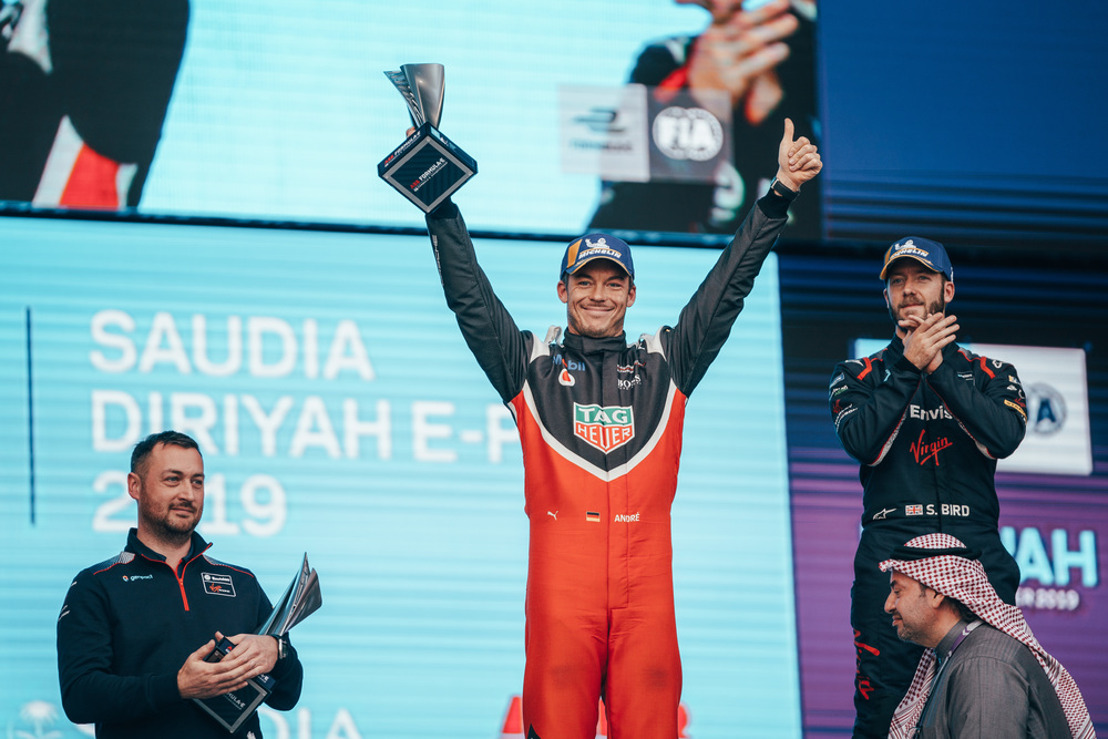 Wednesday, August 19, 2020 — The Berlin E-Prix last week brought Season 6 of the ABB FIA Formula E Championship 2019/2020 to a close – and the first season for the TAG Heuer Porsche Formula E Team. Amiel Lindesay, Head of Operations Formula E, was heavily involved in preparing the works team entry into Formula E after Porsche’s commitment was announced. In an interview, the New Zealander takes stock and reviews the highlights of the last months. He also talks about the insights from the first year and gives an initial indication of what’s to come next season.

Porsche’s first season in the ABB FIA Formula E Championship is over. What is your conclusion?

“Very positive. As a rookie team we put a car on the podium in the very first race, and that was in a championship like Formula E that is incredibly close. This does not happen through just hard work. It is a complete team effort, where we made use of expertise from different backgrounds, using what we have learnt and adapting to this new challenge. We learnt so much in such a short time and continue to learn. I believe we proved we are a team to respect in our first season and achieved all our goals set out last year.”

What are your highlights of the season besides the podium finishes in Diriyah and Berlin?

“Putting the car on pole in Mexico City was a special moment for me – starting the race from pole, seeing your car on the grid in front of the 23 other cars is definitely a moving moment. This also gave us all the extra boost that yes, we do have performance in the car.”

The first season was meant to be a learning year. What did the team, and you personally, learn from the eleven races this season?

“Our rookie season was for sure a learning year, but in motorsport you need to be able to always learn and never stay still, always stay hungry for more. What we learnt from this season, to put it quite simply, was the racing side of Formula E. Yes, we tested prior to our first race but nothing can prepare you 100% for racing, apart from the real thing. With testing you are your own benchmark, so it’s tricky to know exactly where you are – especially in respect to energy management.”

What makes Formula E so special – and was there something that surprised you?

“Formula E is a unique championship with a format that excels you when you’re doing well, and can also spit you out the other side with one small mistake during the day. The race days are compact and intensive – so smooth operation is definitely the key, and being able to adapt quickly when you are maybe slightly outside the window. I wouldn’t say there was anything that surprised me as we all knew it would be hard, and we tried to simulate that in testing as best we could. Maybe the biggest surprise was the huge fluctuations in team performances from one race to the next so it was no surprise that the most consistent team won the season. But the differences that we saw sometimes, even internally in teams, were big and sometimes hard to explain.”

Which E-Prix did you personally enjoy most last season? Why?

“Diriyah was my most enjoyable E-Prix as it was the taste of what we had all been waiting for  – what we had been testing for. To be there and come away with P2 in the first race was just amazing and one of those motorsport moments in your career that you will not forget. Also the nerves involved leading up to the event builds it up inside you for some time – then the green light goes on and it’s a fantastic feeling to be part of it – but that was just the beginning.”

André Lotterer showed many times that he can fight for victory. How do you see his chances for the upcoming season and what do you expect from him?

“André is one of the quickest drivers in Formula E and proved that fact again this year for us. Obviously, he came from a team that had won the team and driver championships, so a change was always going to be hard for him and us. Despite that, André adapted to his new environment well and the team was able to feed off his Formula E experience. You can’t overstate how important experience is. I believe that André has matured as a driver and raced in a very controlled manner. We grew together, and over the Berlin event André also started to develop real confidence that was there not only on certain laps, but over the whole race distance. He has all the tools needed to win races. So, we are really looking forward to Season 7. And the team wants to win just as much as André. I believe we can fight for the championship next season – even though many tracks will be new to us as they were dropped this year due to the coronavirus pandemic. One thing that really impressed me was that our preparation was right for nearly every track. That means the preparation at home in the simulator was pointing us in the right direction and gives us more confidence going to new tracks next year. However, we can’t forget that other teams have had five or so years more experience than us on certain tracks.”

What is your conclusion of Neel Jani after his first full Formula E season?

“Neel has been involved in the development of our car from the start and brought his immense experience to the table. Then he was just missing that little bit of luck needed in many races to bring home good results. That made it even better that he had his breakthrough in Berlin. Him qualifying for Super Pole and securing a strong sixth place were the reward for him never giving up and always giving 100 percent for the team.”

In signing Pascal Wehrlein the team welcomes a new driver to the Porsche family. What do you expect from him?

“Pascal is an extremely fast driver with Formula E experience. I can’t wait to see him in our Porsche 99X Electric. Pascal has already proved he can win races in Formula E and we want him to win races with us going forward. We warmly welcome Pascal into the Porsche family and are looking forward to a successful future together.”

What do you expect in terms of the performance of the Porsche 99X Electric next season?

What are the team objectives for the new season?

“We want to be moving up the pitlane. We want to be the team to beat, but we have full respect for the competition. It is no easy task, but one we welcome.”

Which race are you most looking forward to next season?

“It’s hard to say after such a short season, but from where we have already been, I would say Chile. Due to the fact that both our cars were effectively out of the race after the first lap, we want to come back strong there. Mexico will also be another highlight. The fans there were amazing and made the atmosphere fantastic.”

After a total of eleven races in five different locations, the TAG Heuer Porsche Formula E Team finished their first year in 8th place in the team standings, and with 79 points, picked up the highest number of points for a rookie team since the second season of the fully electric race series.

André Lotterer finished in 8th place in the driver’s standings, with 71 points. He chalked up two podiums and six other finishes in the points. That made him the best German driver in the championship.

Neel Jani completed his first full season in Formula E and got his best result at the penultimate race in Berlin, finishing in sixth place. He ended the season in 20th place in the driver’s standings, with eight points.

The TAG Heuer Porsche Formula E Team set a milestone at the opener in Diriyah (SA) last November, when Lotterer crossed the finish line in second place in his Porsche 99X Electric with car #36 to make Formula E history: That was the first time a rookie team finished on the podium in its first race since the maiden season in 2014/2015.

And Lotterer secured his pole position at the fourth race in Mexico City (MX) earlier than any other rookie team driver since 2014/2015.

At the ‘restart’ in Berlin came the next podium finish after Diriyah. In second place, Lotterer only narrowly missed out on the first win.

With two podiums, the TAG Heuer Porsche Formula E Team claimed more than any other rookie team since the second Formula E season.