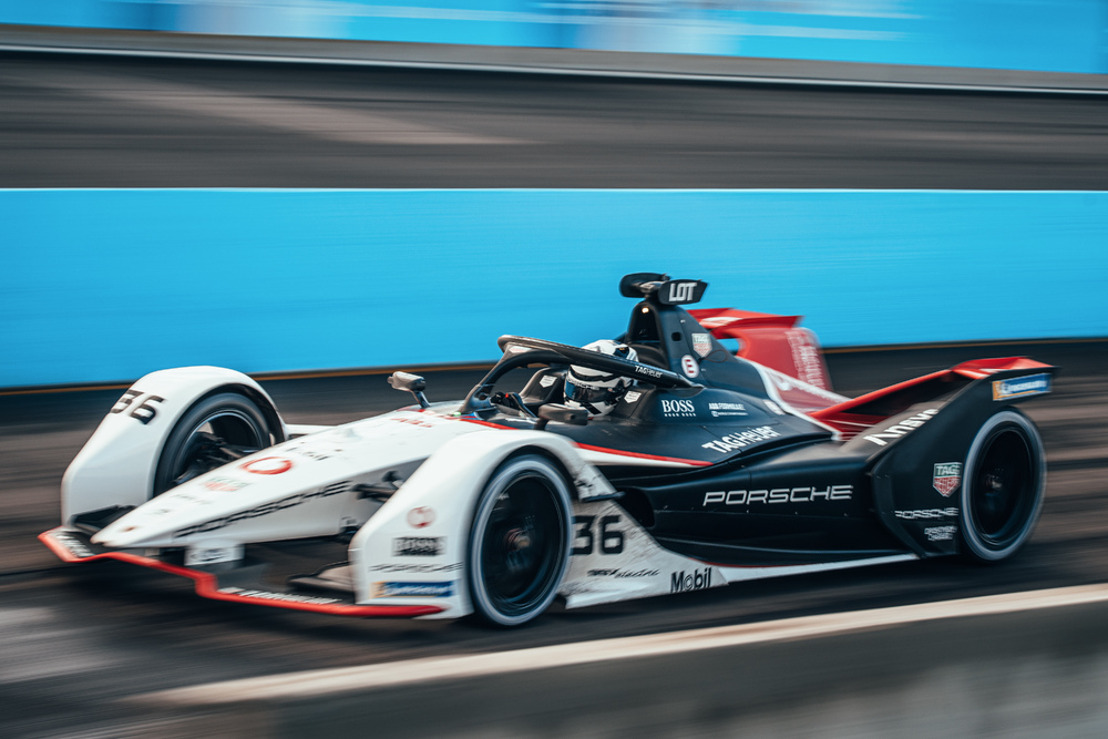 Now, the TAG Heuer Porsche Formula E Team is eager to turn this disappointment into positive energy at the New York City E-Prix. “We’ll be particularly motivated when we line up for the race through the streets of New York and even stronger than in Puebla,” says Amiel Lindesay, Head of Operations Formula E. “We’re perfectly prepared for the event and we want to finally score our first victory.”

Amiel Lindesay, Head of Operations Formula E
The team delivered its best performance so far in Mexico, only to go home empty-handed. How do you all cope with that?
“We left Puebla with the knowledge that we can lead a race from start to finish and win it. This gives us a great deal of positive energy and even more motivation to remain on this steady course together. After setting pole position for race 8, we not only underlined that we can stay at the front, but that we’re efficient as well.”

The New York City E-Prix is again new territory for you. What expectations do you have as you head to New York?
“Yes, the New York City E-Prix is new for the team, but André and Pascal have actually raced there before. Their experiences play a key role in our preparations. Although the track is new for us, we’re very confident that we’ll pick up in the US where we left off in Mexico.”

Pascal Wehrlein, Porsche works driver (#99)
After your strong performance in Puebla, where would you be in the rankings without the disqualification in the first race and the time penalty in the second race?
“At the top. We all did a super job in Puebla and we deserved that first victory. But no matter how big the disappointment was at first, we have to keep working hard and try to make the most of the next opportunities. We’ve taken a good look at what happened in Puebla but now we’re focussing on New York. We’ll do everything to again get the best out of ourselves and our package. If we manage this, we’ll definitely be as strong as we were in Puebla. The racetrack is new turf for the team but I’ve already competed there. It’s a typical city circuit, very narrow with walls on either side of you. I love such Formula E racetracks.”

André Lotterer, Porsche works driver (#36)
What are you taking from Puebla to New York, how are you feeling and what are your expectations?
“It’s a great location and a great track – so I’m very excited for New York. Puebla wasn’t an easy weekend for me. I struggled in race 8 without really knowing what was going on. I was going well in race 9 until I picked up the advertising banner. We certainly collected a lot of data, we looked at what we did right and what wasn’t good. We then implemented what we learned to prepare for New York. I’m confident that things will be better again for me there. The team supports me and is incredibly focussed. At some point, it simply has to work.”

The racetrack
Twenty-four drivers will again battle for prestigious victories on a typical Formula E circuit at the New York City E-Prix. The 2.320-kilometre Red Hook Circuit around the Brooklyn Cruise Terminal with a view to Lower Manhattan and the Statue of Liberty is lined with walls that are unforgiving of the slightest mistake. The course’s 14 corners range from a hairpin (turn 10) over a chicane (turn 6) to the high-speed kink (turn 14) leading onto the start-finish straight which competitors tackle at around 140 km/h. The weather can play a key role: from 35 degrees Celsius to torrential rain, anything is possible at this time of year. “In New York, we’re finally returning to the real city circuit feeling,” says André Lotterer with a smile. “The racetrack is bit bumpy so you need a good chassis. It should suit our car.” Pascal Wehrlein adds: “It’ll be important to start from the front of the grid and make it through the first lap safely because the course is very narrow in places.”

Live TV and Internet coverage
The worldwide broadcasting schedule of the Formula E event in New York City is available on: https://www.fiaformulae.com/watch/ways-to-watch.

The media service
The first photos from New York City are available on the Porsche Press Database on 9 July. Comments from the Head of Formula E Operations and drivers will be included in the race reports on 10 July (race 10) and 11 July (race 11). All times EST. Further information about the TAG Heuer Porsche Formula E Team will be posted live on the Twitter channel @PorscheFormulaE. All relevant information about the team, the drivers and the racing series can be found in the Porsche Formula E Media Guide https://media.porsche.com/formula-e. The content will be regularly updated over the course of the season and expanded with additional interactive material.

The Porsche 99X Electric
Campaigning the Porsche 99X Electric, Porsche returned to open-wheel single-seater racing in 2019 after more than 30 years and celebrated a successful debut scoring second place at the season-opener in Saudi Arabia’s Diriyah. The fully-electric racing car sporting the Weissach-developed Porsche E Performance Powertrain also serves as a development platform for the sports car manufacturer’s fully-electric production models. Energy management and efficiency are important factors of success in Formula E and in the development of production cars. The Porsche 99X Electric produces a maximum output of 250 kW (340 hp) in qualification mode and 200 kW (270 hp) in normal race mode. Attack Mode boosts the output to 235 kW (320 hp), with Fanboost increasing the performance to 250 kW (340 hp). Maximum recuperation is 250 kW; the usable battery capacity is 52 Kilowatt hours.

Formula E
Formula E is the world’s first fully-electric street racing series and has been treating people living in major cities to thrilling motorsport since 2014. As an accelerator for innovative and sustainable technologies of mobility, it promotes the worldwide acceptance of electric vehicles with the aim to counteract climate change. The format is compact: practice, qualifying and race all take place on one day. Each race is contested over 45 minutes plus one lap. Formula E, which features a team and driver world championship for the first time this year, has attracted more automobile manufacturers than any other racing series. This makes for interesting and hotly contested races. In 2021, the TAG Heuer Porsche Formula E Team tackles its second season running the Porsche 99X Electric.