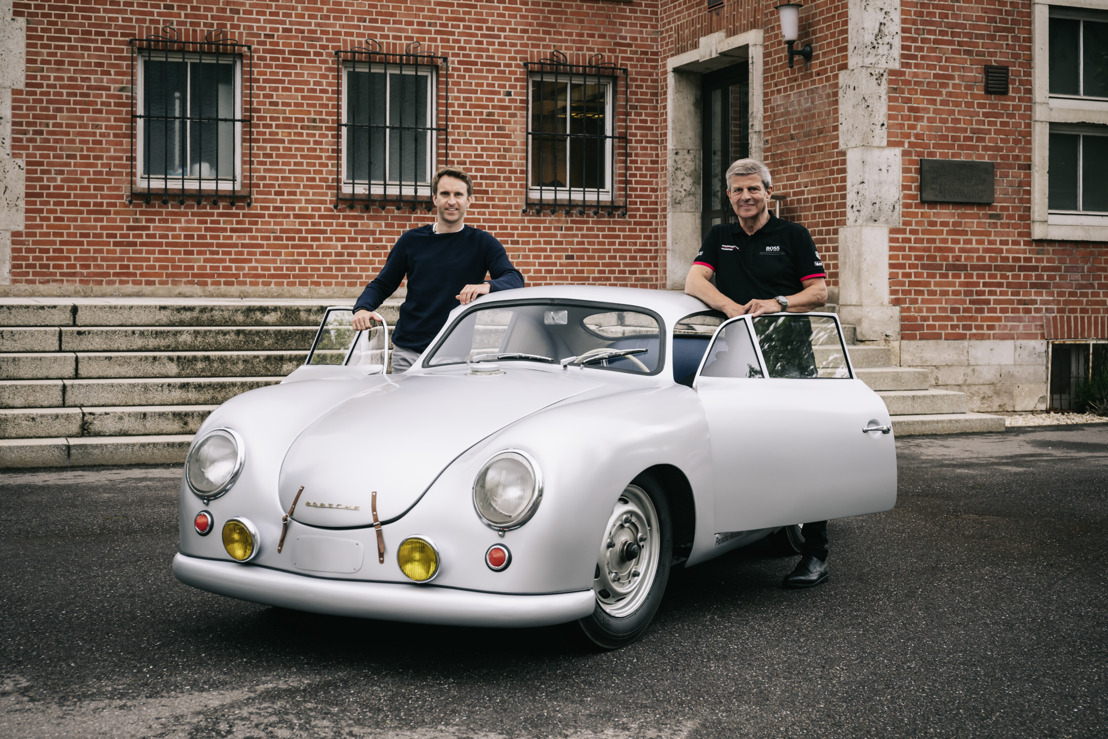 For the first episode of Porsche Moments, Timo Bernhard invited a companion whom he had not seen for two years: Fritz Enzinger, Vice President Motorsport at Porsche. Enzinger led the brand to three overall victories in Le Mans. The reunion in front of the historical brick building of Werk 1 is like a meeting of old friends – it’s as if the two had brought the legend of Le Mans to Zuffenhausen. “Trust and friendship are important for success in racing,” explains Enzinger as he climbs out of the 356 SL. SL stands for Super Light. Thanks to its aluminium body, the Coupé weighs only 680 kilograms. Almost 120 kilograms less than the steel-bodied 356 Coupés produced by Reutter in Stuttgart from November 1949. “Wilhelm Hild from the Porsche works team gave the 356 SL the nickname of ‘aluminium can’," Enzinger reveals and laughs. In-house, the car bears the name “Type 514 Porsche Sport for Le Mans 1951”.

From 1948, Porsche built 44 Type 356/2 Coupés in Gmünd, in Austria’s Carinthia region. Eleven other body shells came to Stuttgart and some were later further developed here. The car featured in the first episode of Porsche Moments is the historical godfather of the class winner and was made in 1952 – one year later than the original No. 46 winning car. “Just imagine – a car with less than 50 PS drives 2,840.65 kilometres in Le Mans at an average speed of 118.36 km/h. And that in 1951! It had travelled to the race by road – and then drove back to Zuffenhausen on country roads,” says Enzinger. The winning car was driven by French importer Auguste Veuillet and his compatriot Edmond Mouche, two drivers for a 24-hour race – nothing unusual at the time.

The meeting of Bernhard and Enzinger in front of Werk 1 is symbolic for the journey of the Porsche from Zuffenhausen to the first class victory in Le Mans. Originally, the team had started at the Reutter building. “These days it is inconceivable to drive competition cars by road to Le Mans,” says Bernhard about the risky eleven-hour trip arriving on 16 June 1951. “Departure was at 7:15 in the morning, Ferry Porsche sent off the team,” says Enzinger and shows historical photos and entries about this moment in the journal of then chief designer, Karl Rabe. Racing driver Veuillet and Charles Faroux race director of the 24 Hours of Le Mans had managed to convince Ferdinand and Ferry Porsche to participate in Le Mans at the Paris Motor Show the year before.

The path to the first class victory on 24 June 1951 proved to be long – two out of three competition and training cars had already been in accidents by the time the race started. All hopes were pinned on the remaining lightweight and the 46 PS four-cylinder boxer engine with increased displacement. “If you win in Le Mans with a Porsche, that reverberates throughout the whole company,” remembers Enzinger. “That must have been the same then with the first class victory. Le Mans is simply a magical place”. Enzinger’s best Porsche Moment in France was the win in 2015: “We dominated from the first free practice, an indescribable feeling. The suspense peaked at the finish line.” Timo Bernhard’s personal Porsche Moment is the overall victory in 2017. “Winning three years in succession is only possible with the best team. We came from 21 nations – and we all had the same goal”. Talking about “same”: Fritz Enzinger always had the same hotel room from 2014, no. 424, a tradition that calms the nerves. Another tradition for Porsche is the transfer of technology from motorsport to production. This is still the case today and has never been any different. “Race tracks are development laboratories for the brand’s technologies. At Porsche, innovative solutions must be proven under the most arduous of conditions. Only then can they be put into road vehicles,” says Bernhard. “By the time the car returned home, when the engine of the 356 SL had been run in, the Porsche had some 4 PS more, according to anecdotes,” says the 40 year-old.

To honour the Porsche success story in Le Mans worldwide, the sports car manufacturer will also be holding a roadshow from June 2021 to January 2022 in addition to Porsche Moments. The plan is to stop at 14 stations in 10 countries, including France, the Netherlands, the UK, the USA, China, the United Arab Emirates and Germany. Porsche enthusiasts can look forward to static and dynamic appearances of more than 20 original winning cars from the historical collection. In all Porsche Experience Centres globally, so-called Heritage Corners – in keeping with the roadshow – will be dedicated to exploring the history in greater depth. In addition, various classic car events are being planned, such as at the Monterey Car Week in California. Depending on the pandemic situation, the use of drivers from that time may be possible either live or virtually. They will give Porsche fans and motorsport enthusiasts their insights into exciting experiences.

Porsche Museum will post the first Porsche Moment with Timo Bernhard and Fritz Enzinger on Instagram @porsche.museum on Wednesday, 16 June 2021. Five further episodes will then follow every week, as the Porsche Moments format will continue in Weissach. There, Timo Bernhard will meet protagonists and contemporary witnesses such as Norbert Singer, Walter Röhrl and Hans-Joachim “Strietzel” Stuck. The following models will also be on show: 917 KH (1971), 936/81 and 924 GTP (1981), 962 (1987), 911 GT1 (1998) as well as the 919 Hybrid (2017). Many exciting anecdotes that make the legend of Porsche in Le Mans tangible and explain the historical significance of each win await. The roadshow will be extensively showcased on the company’s social media channels, which will make it possible to get some special insights.

Interested fans can also follow “The Porsche success story in Le Mans” from behind the glass partition that provides a view of the workshop in the Porsche Museum. The roadshow makes a stop there and six Le Mans class and overall winners will be on show.