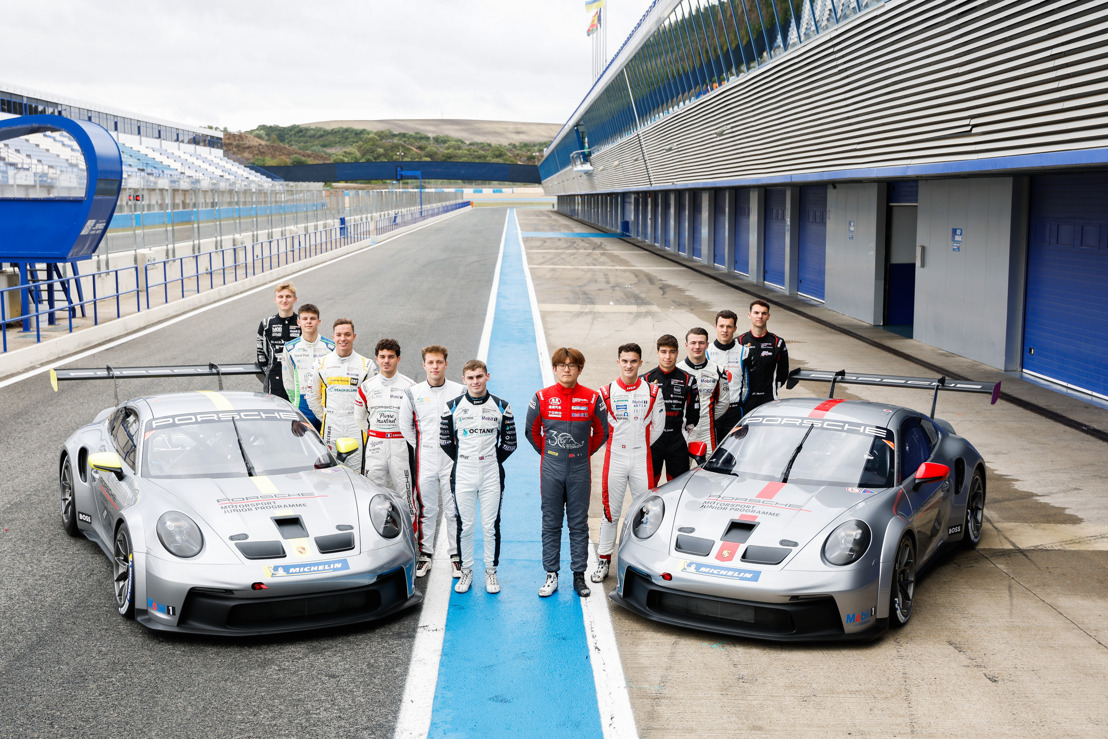 Twelve particularly accomplished racing drivers took part in a three-day shootout in Jerez, Spain, with the intention of becoming the 2023 Porsche Junior.

Stuttgart. For the last 26 years, the sports car manufacturer’s exemplary junior programme has been one of the most successful of its kind in motorsport. This initiative has paved the way for many talented youngsters to pursue professional careers as works drivers, producing numerous world champions and Le Mans winners in the process. The successful candidate receives a sponsorship package of up to 225,000 Euros. The new Porsche Junior will be announced at the “Night of Champions” on December 17th at the Porsche Development Centre in Weissach (Germany).

All the invited candidates share these factors: they are no older than 24 and have finished in the top five of one of the more than 30 Porsche one-make cup series around the world in the past year, driving the ca. 375 kW (510 PS) 911 GT3 Cup. And they all had to showcase their prowess on and off the 4.428-kilometre Grand Prix circuit. The jury took into account not only top lap times and the general performance on the track, but also looked at how they interacted with the race engineers, their technical competence, their interaction with the media as well as the results of mental and physical tests. In the coming days, the intensive analysis of the collected results and findings will serve as the basis for deciding who will be allowed to compete as the new Porsche Junior in 2023.

Of all twelve young drivers from ten countries, the longest journey was made by Australian Harri Jones. The 23-year-old won the Carrera Cup in his home country in 2022. Luo Kailuo, also 23, travelled to Spain from China as runner-up in the Carrera Cup Asia. Dorian Boccalacci finished second in the Carrera Cup France. The 24-year-old Frenchman has already gained experience in the Porsche Mobil 1 Supercup. This season he finished seventh. The same applies to Bastian Buus. The busy driver from Denmark was nominated for the Junior shootout through the German Carrera Cup after claiming fourth place overall. At the same time, he contested the Carrera Cup France and the Supercup, where the 19-year-old claimed two victories and took home the rookie title as the best newcomer. At 20, Kiern Jewiss has won the Carrera Cup Great Britain in his home country. Keagan Masters from South Africa (22) represents the Carrera Cup Italy as runner-up. Kay van Berlo from the Netherlands, Enzo Elias from Brazil and Harry King (United Kingdom) have taken part in the selection process for the second time. Contesting the Carrera Cup North America, 21-year-old van Berlo finished his season in second place. At 20 years old, Elias can already look back on two Carrera Cup titles in his home country, while Harry King won the Carrera Cup Benelux and finished fifth in the Porsche Mobil 1 Supercup. Rounding out the swift dozen as wildcard entrants are Dutchman Loek Hartog, Giorgio Amati from Italy and Jasin Ferati from Switzerland. At 20 years of age and standing almost two metres tall, Hartog finished the Carrera Cup Deutschland season in fifth and the Supercup in eighth as the second-highest-placing rookie. Amati (23) wrapped up his second season in the Carrera Cup Italy in fourth place, while Ferati is the youngest of the twelve rookie drivers. The 19-year-old won the GT3 Cup classification in the Porsche Sprint Challenge Switzerland.

The successful Porsche Junior Programme reaches far beyond financial support. The holistic concept focuses on all aspects of a professional motorsport career. This includes, for example, comprehensive support provided by Sascha Maassen. The former Porsche works driver is on hand to mentor the juniors before, during and after each race weekend. The University of Potsdam provides sports medicine support. Mental training, media seminars, PR commitments and other marketing activities are also part of the training regime.

“Porsche has provided the most level playing field possible in Jerez so that it’s the participants in our shootout who make the difference,” emphasises Maassen. “We have a huge responsibility in selecting the new Porsche Junior, and we take great care in doing so. Of course, fast lap times and a performance that’s as flawless as possible with the 911 GT3 Cup are important to us – that’s the baseline. But we look just as closely at how talented the drivers behave beyond that: What feedback they give the engineers and their ability to learn, whether they can motivate a team and represent Porsche, how they handle media, and whether they are capable of developing mentally. Ultimately, it’s all about the overall package that the participant offers us.”

Porsche’s Junior programme has boosted the careers of 28 racing drivers since 1997. Of particular note are the careers of today’s Porsche brand ambassador Timo Bernhard (Porsche Junior from 2000 to 2001), Marc Lieb (2000 to 2002) and Earl Bamber (2014): All three won the legendary 24 Hours of Le Mans at least once with the Porsche 919 Hybrid, as well as titles in the FIA World Endurance Championship. Thomas Preining, Porsche Junior from 2017 to 2018, secured two victories in the DTM this year with the 911 GT3 R. At the end of 2021, Laurin Heinrich from Würzburg was chosen. The now 21-year-old finished the current season as the champion of the Carrera Cup Deutschland and secured third place in the Porsche Mobil 1 Supercup. Heinrich attended the shootout in Jerez as a reference driver.

“We are proud of the Porsche Junior concept – after all, it is one of the most successful junior programmes in motorsport,” emphasises Marc Lieb, one of the first participants in this talent development initiative and current Sports Communications Manager at Porsche. “This programme also played an important role in my career and opened the door to professional motorsport for me 22 years ago. Without this support, my dream of winning the 24 Hours of Le Mans would probably have never materialised.”