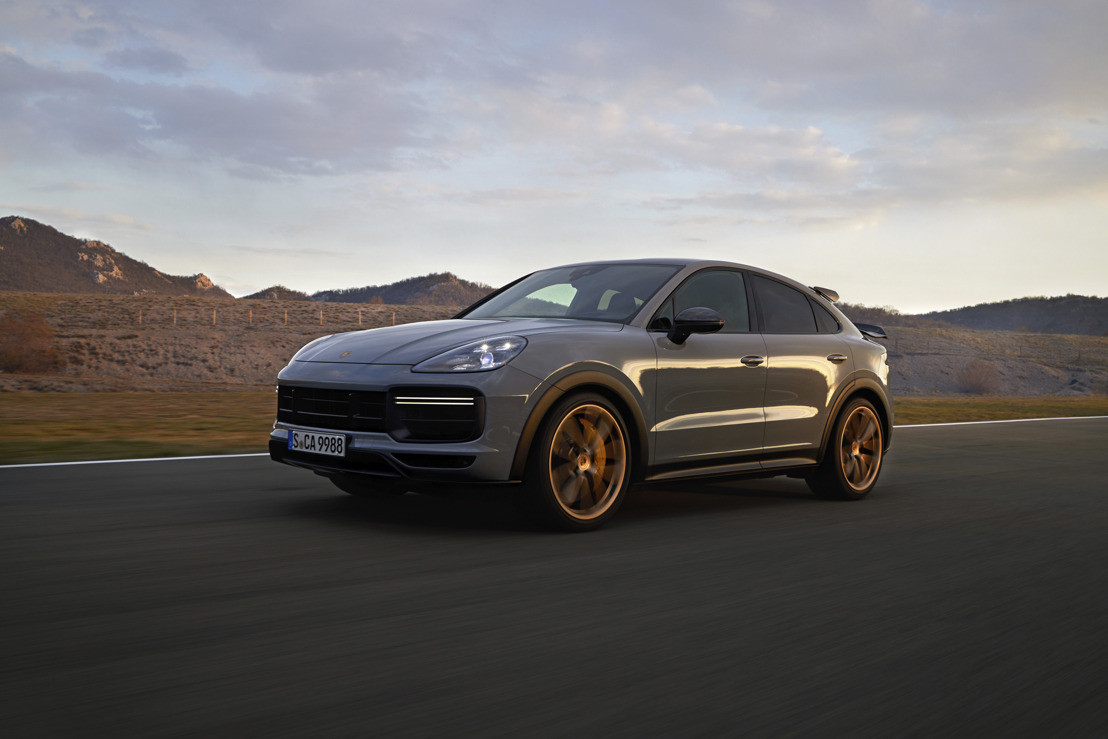 Compared to the Cayenne Turbo Coupé, the Turbo GT rides up to 17 millimetres lower. Based on this, both the passive chassis components and active control systems have been re-engineered and optimised for handling and performance. They also feature specific calibration to guarantee perfect interaction between them. As an example, the rigidity of the three-chamber air suspension has been increased by up to 15 per cent, and the damper characteristics of the Porsche Active Suspension Management (PASM) as well as the application of the Power Steering Plus and rear-axle steering have also been adapted. The Porsche Dynamic Chassis Control (PDCC) active roll stabilisation system now operates with performance-oriented control software. The result is even better roll stability and roadholding, as well as more precise turn-in behaviour at higher cornering speeds. In line with this, the Porsche Torque Vectoring system allows higher torque bias ratios. The comprehensively optimised front axle also improves handling. Compared to the Turbo Coupé, its front wheels are an inch wider and negative camber has been increased by 0.45 degrees to give the new 22-inch Pirelli P Zero Corsa performance tyres, specially developed for the Turbo GT, a larger contact patch. Braking duties are performed by the standard-fit Porsche Ceramic Composite Brake (PCCB) system.

The Cayenne Turbo GT’s biturbo engine is currently Porsche’s most powerful eight-cylinder unit. The most extensive upgrades were carried out in the areas of the crankshaft drive, turbocharger, direct fuel injection, induction system and intercooler. The V8 of the Turbo GT differs from that of the Turbo Coupé in fundamental elements such as its crankshaft, connecting rods, pistons, timing chain drive and torsional vibration dampers. Given the increase in power to 471 kW (640 PS), these components have been designed for higher peak loads and improved driving dynamics. The faster-shifting eight-speed Tiptronic S and the Porsche Traction Management (PTM) system have also been modified. There is also additional water cooling for the transfer case. The standard sports exhaust system, with its central tailpipes, is unique to the Cayenne Turbo GT. From the middle of the vehicle, the exhaust system, including the rear silencer, is made from lightweight and particularly heat-resistant titanium. An additional weight saving is achieved through the omission of the centre silencer.

Sporty equipment: lots of carbon on the exterior, lots of Alcantara in the interior

Optionally available with paintwork in the new Arctic Grey colour, the Cayenne Turbo GT underlines its exceptional athleticism through the outstanding features of its progressive design. These include a GT-specific front apron with striking spoiler lip and enlarged side cooling air intakes, which create a unique front view. A contoured carbon roof and black wheel arch extensions, together with 22-inch GT Design wheels in Neodyme, dominate its side view. The carbon side plates fitted lengthwise to the roof spoiler are GT-specific, as is the adaptively extendable rear spoiler’s lip, which is 25 mm larger than that fitted to the Turbo. This increases downforce at the car’s top speed by up to 40 kilograms. The rear view is rounded off by a striking diffuser panel made of carbon.

Debut in the Turbo GT: new infotainment system for the Cayenne

The sporty character of the Cayenne Turbo GT is highlighted by the high-quality standard equipment and extended Alcantara features of its interior. Eight-way sport seats in the front and a sport rear seat system with two seats are standard. They each come GT-specific with perforated seat centre panels in Alcantara, contrast accents in Neodyme or Arctic Grey and ‘turbo GT’ lettering on their headrests. As is expected on Porsche’s sports cars, the multifunction sports steering wheel features a yellow 12 o’clock marking. Depending on the specified trim, select accent strips are finished in matt Black.

With the Turbo GT, the next-generation Porsche Communication Management (PCM) system is launched onto the market with improved performance, a new user interface and new operating logic in the Cayenne. As before, PCM 6.0 is fully compatible with Apple CarPlay but now also allows for in-depth integration of Apple Music and Apple Podcasts. In addition, the infotainment system now also includes Android Auto, which means that all popular smartphones can now be integrated.